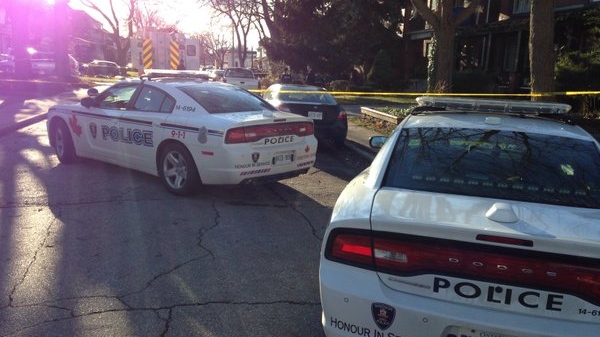 Police investigate at the scene of a homicide in the 100 block of Oak Street in Windsor, Ont. on Thursday, Dec. 24, 2015. (Chris Campbell / CTV Windsor)

WINDSOR, ONT. -- Dia Hanan, who was sentenced Monday to 15 years in prison for a 2015 double-shooting, is planning an appeal of both the conviction and sentence.

His family says they will also stage a protest in front of Superior Court next week.

Hanan’s mother Huda Najjar told reporters outside court on Monday he is innocent. “My son is not guilty, believe me,” says Najjar. “I'm not lying to you guys. God, he knows everything.”

Hanan was found guilty in November 2019 of manslaughter in the death of Alekesji Guzhavin.

Judge Kirk Munroe in handing down the sentence, told the court he struggled to believe Hanan's testimony after a jury convicted the 36-year old of manslaughter and two weapons offences.

During the four-week trial late last year the jury heard the two victims visited Hanan's home looking for money when shots were fired.

“His ultimate decision has been to appeal the decision and now also the sentence, says Hanan’s lawyer Christopher Uwagboe.“I don't know the timeline on that. I'll be assisting him on that and we'll be talking about that in the coming days."