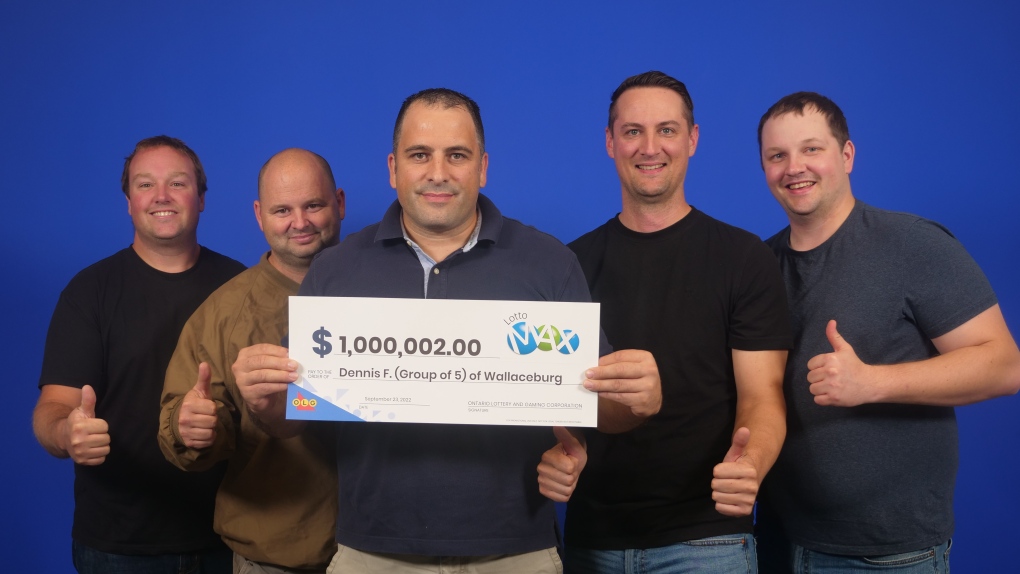 A group of five coworkers in southern Ontario are sharing a $1-million lottery prize. (Source: OLG)

A group of five coworkers in southern Ontario are sharing a $1-million lottery prize.

The group of process engineers have been working and playing together for 10 years. They decided to form a group after others at work were doing the same.

"Lee and I were sitting together after our shift when I checked our ticket using the OLG App. I saw the Big Winner screen and turned to Lee and said, 'Check this on your phone,'" said Figueiredo while at the OLG Prize Centre in Toronto.

"I immediately wondered how he managed to get a fake winning ticket," Coke said. “Everything Dennis said to me felt exactly like what he would say to prank me.”

Roberts was at the grocery store when Figueiredo called, but he didn’t believe him either.

“I heard him scan the ticket and heard the winning sound but told him to send me a screen shot of the win,” said Roberts. “Then I suddenly forgot what I was supposed to buy at the grocery store.”

"All these years of pulling pranks on these guys caught up with me in that moment," said Figueiredo.

The group members have many plans for their shares of the windfall, including a putting money towards a cottage, truck, home renovations and childrens' savings.

“I always dreamed of winning a ‘big one’ so I’ll have to scale down my plans a bit,” said Davidson.

The group said they will continue to play as a group in hopes of winning the “big one” one day.

The winning ticket was purchased at Taylor Convenience on Dufferin Avenue in Wallaceburg.