They will eventually be seen high above for many miles, or kilometres away.

“This is an opportunity for local artists to have a creative inspiration to be here, it’s going to be visible for kilometres and kilometres and it’s going to give a good sense of pride,” said Mark Butler, director of communications for the Windsor-Detroit Bridge Authority.

The tower crane climbing system, which the murals are on, involves temporary steel structures used to give workers better access to build to the massive towers that will support the bridge.

“It helps with the safety of the workers who are working inside and also it provides a bit of a climate for when you’re doing the curing of the concrete,” Butler said.

As the tower cranes extend to their peak of 250-metres, so too will the murals. 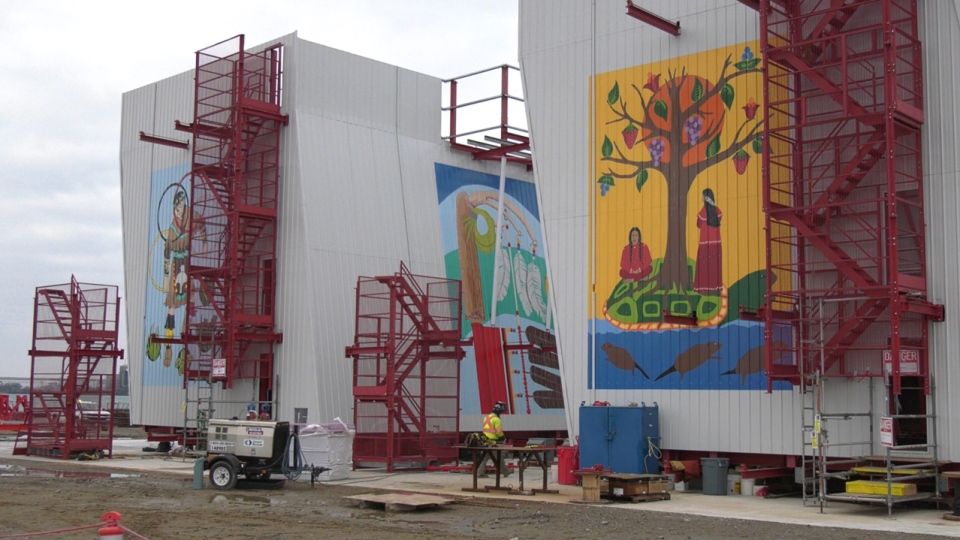 He said the designs actually came from the site workers.

“They came up with the idea,” Butler said. “There’s a possibility to do some advertising, they suggested let’s do a Canadian maple leaf and then that evolved into approaching Walpole Island First Nation and Caldwell First Nation in doing First Nation art which is representative of the area in which the GHIB is being built.”

Teresa Altiman from Walpole Island is one of the artists involved.

And to think that my work is going to be shown in such a prominent location is really awesome,” she said.

Altiman said her paintings are intended to represent the bridge team’s integrity, determination and forcefulness.

“I just hope that when people see the paintings, I hope that they look at them and know that they are part of who we are as First Nations people,” Alitman said.