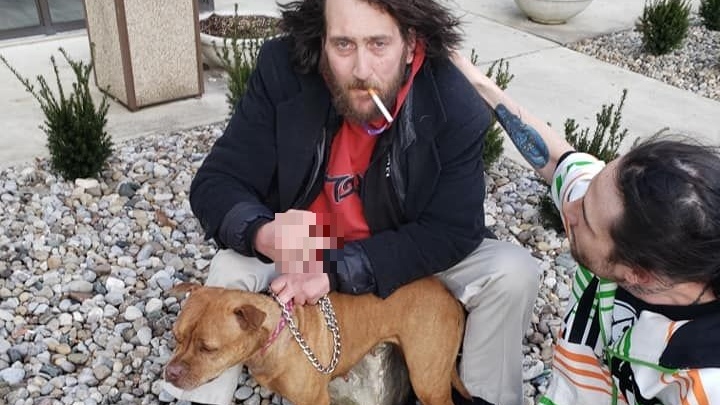 A man who identified himself as John Scenna is seen with his dog. (Courtesy GoFundMe)

A second crowdfunding page has been launched after a Windsor dog attack.

John Scenna, the owner of the attacking dog, posted his side of the story on GoFundMe. The post refers to the dog as both 'Karma' and 'Corvus'.

“Wasn't Corvus fault, it was my fault. I was exhausted from walking around for hours and fell asleep. She doesn't deserve to die,” he posted on GoFundMe.

In a brief interview with CTV Windsor, Scenna says he does not want any money. He claims the purpose of the page was so he could explain his side of what occurred that day.

Scenna admits he is worried his dog will die.

"I have to say the humane society has been kind enough to let me visit and i appreciate that," says Scenna. "They've been great and when I go and visit her, she's doing good."

The other owner Joe McParland, says his 10-year-old greyhound, Vici, died last week after getting attacked on Ouellette Avenue near Ellis Street on April 26.

McParland says he was walking Vici when a dog had latched its jaws around his dog’s neck.

‘Vici’ died last Wednesday of a heart attack while recovering from injuries after seeing a veterinarian. A GoFundMe page was created to help cover the vet bills.

McParland tells CTV News he has filed a notice of claim against the City of Windsor.

His lawyer, Richard Pollock, says they have proof the same dog attacked another dog earlier on Friday, and police released the animal to its owner.

Pollock says the purpose of the claim is to hold the city accountable.

Tamara Berthiaume tells CTV Windsor her 12-year-old black lab ‘Shadow’ was the victim of the first attack on the same day.

People nearby rushed to the scene before police were called. ‘Shadow’was taken to the downtown veterinary clinic.

The notice of claim from McParland states the city should have known that the subject dog was “dangerous” within the meaning of By-Law No. 245-2004.

“I don't want to see the dog destroyed. I want the dog re-homed with somebody who's responsible, a good custodian for this dog," says McParland.

McParland claims the attacking animal is a mixed-breed pit bull, but that is still in question even though Scenna’s GoFundMe page lists the animal as a pit bull.

Current legislation bans pit bulls in Ontario, places restrictions on existing pit bulls, and toughens the penalties for the owners of any dog that poses a danger to the public.