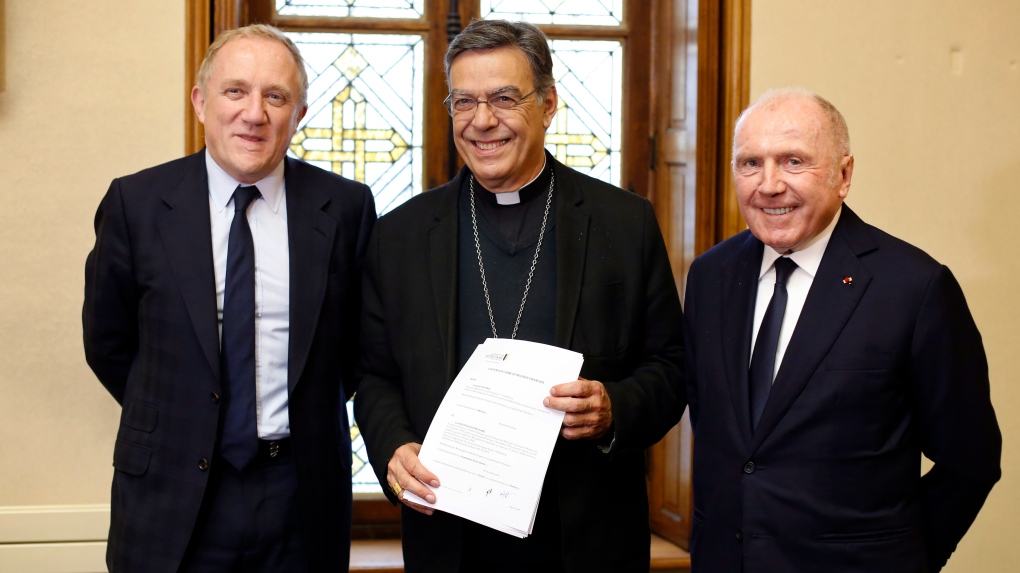 Surrounded by portraits of former cardinals, the Pinaults signed the donation agreement at the Archdiocese of Paris Tuesday. The money will give the Notre Dame Foundation a much-awaited financial boost as authorities draw up plans for the cathedral's reconstruction, following the devastating fire on April 15.

Paris Archbishop Michel Aupetit says "everyone gives what he can according to his needs, but the big donors give us breathing room."

Francois Pinault said that they hoped announcing their donation publicly would motivate others to chip in as well.

"It is certainly vulgar to make a gesture and then promote it, but the idea was to generate others," he said.

A groundswell of support quickly materialized in the hours and days after the blaze ravaged the monument.

"It came spontaneously during that evening, when we didn't yet know whether the cathedral could be saved," Aupetit said of the Pinault family's pledge. "It launched a movement that is still ongoing, because we still have 140 donations a week."

The foundation received 36 million euros ($39 million) from 46,000 individuals, 60 businesses and 29 municipalities between April 15 and the end of September, according to a statement. Aupetit said he's received donations as small as one euro.

But big donations, like the Pinaults', have taken months to materialize. Meanwhile, the foundation has relied mainly on small, individual donors from France and the U.S. to pay the salaries of workers still labouring to clean up the site and contain the damage from the blaze.

Dimitri Besse, a public relations representative for the Pinault family, noted that the Pinaults donated more than 10 million euros in emergency funds in June at the request of the Notre Dame Foundation.

Aupetit said authorities won't know the total duration and cost of the project until the spring. President Emmanuel Macron has said he hopes to complete the restoration within five years, but some experts say that timeline is overly ambitious.

For now, Aupetit said, workers remain focused on clean-up and safety measures, like removing scaffolding that melted in the fire. Simply preserving the damaged building in its current state costs 31 million euros ($33.8 million), he said.