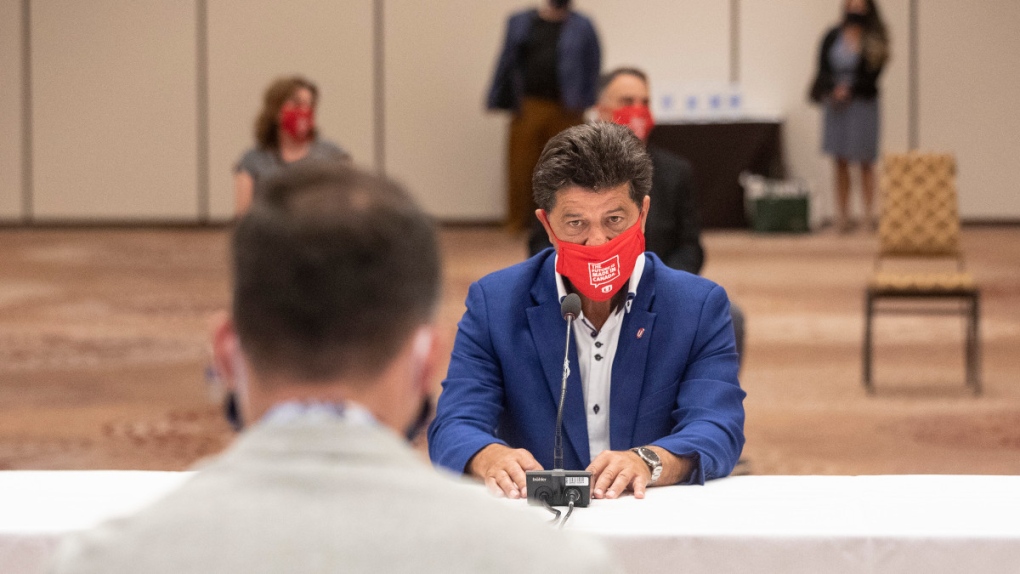 Jerry Dias, President of the Unifor union, sits opposite Ryan Kantautas, Vice President of Human Resources at Ford Canada, at the start of formal contract talks with the Detroit Three automakers, Fiat Chrysler, Ford and General Motors, in Toronto, on Aug. 12, 2020. (Chris Young / THE CANADIAN PRESS)

TORONTO -- Unifor announced that Ford Motor Company is the target to set a pattern agreement in labour negotiations ahead of a strike deadline later this month.

Unifor National President Jerry Dias made the announcement Tuesday in Toronto, as the country's largest private-sector union pushes for commitments that new products will be made at Ontario plants, especially electric vehicles.

The union says out of the Detroit Three automakers, it will target Ford, rather than Fiat Chrysler or General Motors.

Unifor local 200 president John D’Agnolo says he is quite happy his members will set the tone in the latest round of negotiations.

“if you don’t have a future like Oakville right now by the end of 2023 they don’t have anything,” he said. “So it’s important that we get a future, no different than 2016 with Windsor.”

Roughly 1,600 members work at the Ford plant in Windsor.

D’Agnolo tells CTV News they’ll be looking for improvements across the board, including pension and benefits.

A strike deadline has been set for Sept. 21.

Meanwhile, Unifor local 444, which represents FCA workers at the Windsor Assembly Plan were hoping they’d be chosen as the target for pattern bargaining.

President Dave Cassidy says the plant needs product, and approximately 500 workers have been laid off.

Unifor Local 444 posted on Twitter that they “wish Ford the best of luck in establishing a strong pattern for all our auto members.”

Folks, unfortunately, we have not been chosen to set the 2020 auto pattern. We wish Ford the best of luck in establishing a *strong pattern for all our auto members, and we will stand with them in solidarity as they battle at the bargaining table.

The focus will be on negotiating with Ford until its strike deadline on Sept. 21.

The talks -- which take place every four years -- come as Ford employees face expiring product lines in Oakville, while Fiat Chrysler workers have seen shift cuts in Windsor and Brampton.

With files from The Canadian Press, in an article that was first published Sept. 8, 2020.