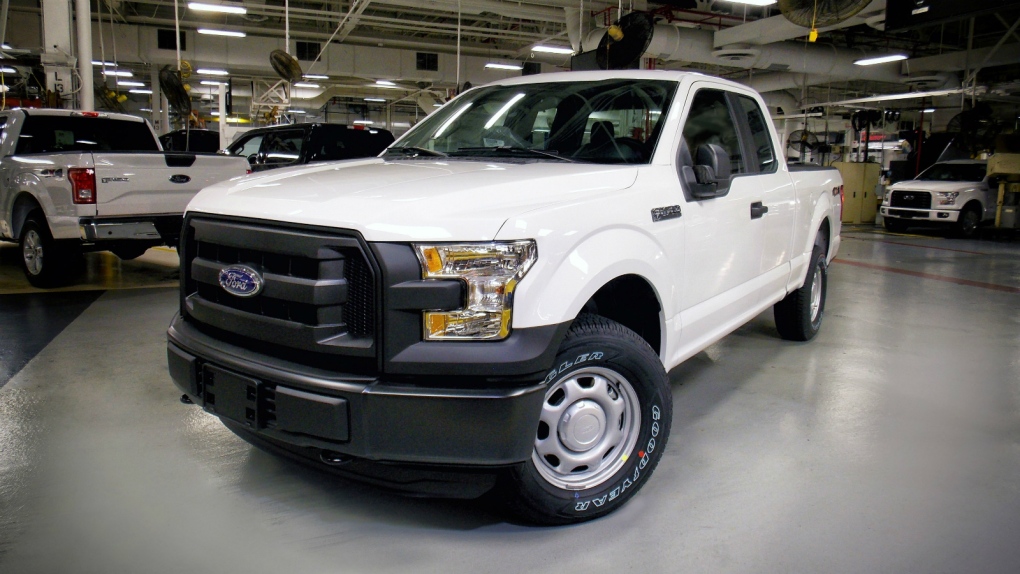 The 2016 Ford F-150 is the only full-size pickup truck to score the top rating in new front crash tests performed by the insurance industry. (Ford Motor Company)

DETROIT -- The 2016 Ford F-150 is the only full-size pickup truck to score the top rating in new front crash tests performed by the insurance industry.

Rival pickups from Chevrolet, GMC, Ram and Toyota didn't fare as well, according to results released Tuesday by the Insurance Institute for Highway Safety.

The institute evaluated 2016 models in a small overlap crash test, which replicates what happens when a vehicle runs off the road and a portion of its front end hits a tree or a pole at 40 miles per hour.

The tests evaluated both crew cab and extended cab versions of each truck, since those are the most popular body styles. A crew cab has four full doors and two full rows of seating. An extended cab has two full front doors, two small rear doors and smaller second-row seats.

The institute also evaluated different body styles because past tests have shown varying results. In tests last year, the 2015 F-150 SuperCab -- the extended cab version of the F-150 -- lacked some of the structural elements of the larger F-150 SuperCrew so it got lower safety ratings.

Ford responded by adding reinforcements to the 2016 SuperCab, including high-strength steel tubes in the wheel wells and aluminum rocker panels on the sides that help absorb energy from a crash. Ford also added nylon reinforcements to the door hinges. With those enhancements, both versions of the F-150 now have the institute's highest safety rating of "good."

The results were a vindication for Ford Motor Co., which switched to a lightweight aluminum body on the F-150 in the 2015 model year in order to increase fuel economy. Ford was the first automaker to move away from a steel body on its pickups, and some had questioned whether aluminum would perform as well.

Crash test results varied for other brands. The extended cab versions of the Chevrolet Silverado, GMC Sierra and Toyota Tundra, for example, all performed better than the larger crew cab versions. But the institute said all of them failed to protect the crash test dummy's lower leg and foot. None got the highest safety rating.

Toyota Motor Corp. is evaluating the results, spokeswoman Cindy Knight said. She stressed that the Tundra meets or exceeds all federal safety requirements. The institute performs a different set of tests than federal regulators.

Both versions of the Ram pickup were the worst performers on the small overlap test. The institute said the trucks had a poor structure and the force of the crash pushed the instrument panel and steering wheel back toward the dummy. A message seeking comment was left with Fiat Chrysler.

The institute also tested roof strength to see how well the pickups would protect an occupant in a rollover crash. Roof strength is especially critical for pickup trucks, since studies have shown that pickup drivers are less likely to wear seat belts. A crushed roof can break window glass and doors and make it more likely that an unbelted occupant will be thrown from the vehicle.

The F-150, both Silverados, both Sierras and the Tundra Double Cab -- the extended version of the Tundra -- all got the highest ratings for roof strength. The Tundra CrewMax crew cab and both Rams got lower ratings.

The institute said it plans to test two more full-size pickup trucks, the Nissan Titan and the Honda Ridgeline, later this year after both are redesigned.