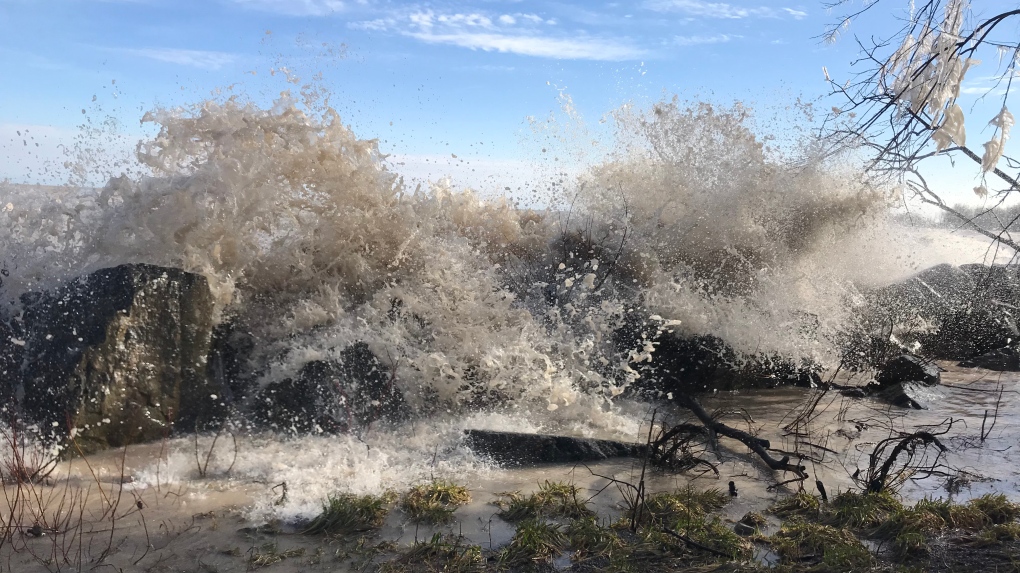 Water crashes up against the shores of Lake Erie in Leamington, Ont. on March 20, 2018. (Rich Garton / CTV Windsor)
Windsor, Ont. -

The Essex Region Conservation Authority has issued a Flood Watch for the Lake Erie shoreline, the Detroit River shoreline and the Lake St. Clair shoreline west of Belle River to Windsor.

The advisory is in effect until 12 p.m. on Saturday.

Winds are currently moderate and out of the east-southeast. Forecasts indicate that winds are expected to stay out of the easterly directions until mid-Saturday, but potentially increase in speed Thursday night.

Winds could be up to nearly 40 km/hr out of the east on Lake Erie. By Friday afternoon, sustained speeds may be up to 55 km/hr over Lake Erie and out of the northeast, and diminishing through Saturday.

ERCA says with current lake levels still elevated as compared to long term averages, low lying areas along the shorelines are still susceptible to flooding and accelerated rates of erosion due in combination of higher water levels and wind induced waves.

The area most likely to be impacted by these conditions is in Leamington between Wheatley Harbour and Point Pelee National Park. Waves can potentially overtop breakwalls and flood low lying properties and roadways within the immediate area.

Strong enough winds out of the northeast over Lake Erie can elevated can further elevated water levels in the western basin, temporarily elevating water in the Detroit River. With current lake levels, the risk of flooding along the Detroit River is much lower under these conditions, however, water levels may still elevate and cause some impact gravity drainage systems.

Winds over Lake St. Clair are anticipated to be generally out of the east and between 30 and 40 km/hr. Waves with the potential for splashing and spray west of Belle River is anticipated; however, at this time, winds are not anticipated to be strong enough to have an impact on Detroit River water levels.

People are encouraged to take extra caution to avoid areas where flooding is occurring as well as rivers, streams, and shoreline areas during significant rainfall and wind events.

ERCA officials will continue to monitor conditions as they change and issue upgraded advisories as required.