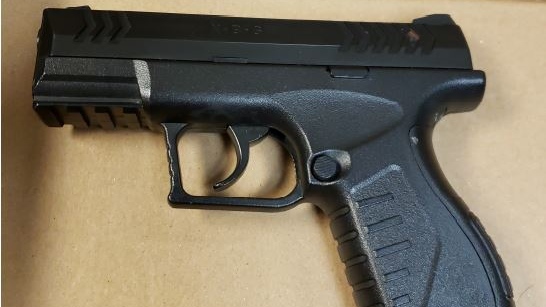 Officers responded to a call for service regarding a report of a person in possession of a firearm on Wednesday around 2 p.m.

A man reported that he witnessed two male suspects who had been driving a vehicle in an odd manner in the area of Wyandotte Street West at Rankin Avenue.

At one point, both adult suspects exited their vehicle and began to approach the victim on foot.

The victim was able to leave the area and immediately reported the incident to police.

Officers obtained a description of the involved vehicle.

The subject vehicle was quickly located in the same area and officers conducted a vehicle stop.

Both men in the vehicle were arrested without incident.

A subsequent search of the involved vehicle led to the seizure of a black pellet gun, a knife, and 0.6 grams of suspected fentanyl.

Carmine Lanno, 51, from Essex and Scott Prentice, 54, from Amherstburg, are both charged with assault with a weapon, possession of a weapon dangerous to the public peace and possession of a controlled substance - suspected fentanyl.

Police say although the investigation revealed that the involved handgun is believed to be an air pistol, when a weapon of that nature is brandished, there is no immediate way for anyone to determine whether or not it is a true firearm.

Windsor police would like to allow this case to serve as a reminder of how dangerous replica firearms can be if used in the commission of an offence.