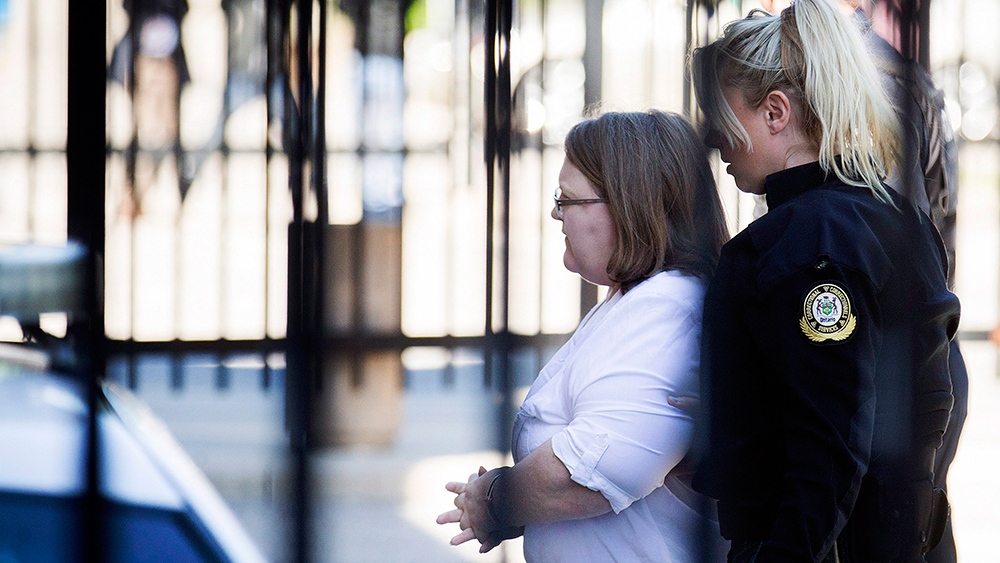 WOODSTOCK, Ont. -- One after another, family and friends of a serial killer's victims described overwhelming guilt, anger and profound sadness when they learned their loved ones had been murdered by an Ontario nurse who was supposed to care for them.
And many spoke about their loss of faith in the province's long-term care system, where Elizabeth Wettlaufer was allowed to cast her "shadow of death" over vulnerable seniors for nearly a decade.
Wettlaufer was sentenced Monday in a Woodstock, Ont., court to life in prison with no eligibility for parole for 25 years after she pleaded guilty last month to eight counts of first-degree murder, four counts of attempted murder and two counts of aggravated assault.
The 50-year-old nurse used insulin trying -- and in most cases succeeding  -- to kill vulnerable victims in her care at three Ontario long-term care facilities and a private home. Her crimes began in 2007 and didn't stop until she confessed to the killings at a psychiatric hospital in Toronto last fall.
Sandy Millard, whose 87-year-old mother, Gladys Jean Millard, was murdered by Wettlaufer in 2011 at Caressant Care in Woodstock, told court about the depression she has fallen into.
"Finding out she was killed by a huge injection of medication she did not need broke my heart," she said.
Her daughter, and Millard's granddaughter, Shannon Emmerton, spoke through tears.
"I don't know if I will ever truly recover," she said.
Patricia Matheson glared at Wettlaufer as she read a statement by her husband, whose mother, Helen Matheson, was killed by the nurse in 2011.
"I lost my mother for the second time. No funeral this time, just shock, followed by the question why," Jon Matheson wrote. "I placed my mother in a facility I researched never once considering she would be a victim of such a despicable act. I ask why, because she didn't eat all the blueberry pie and ice cream?"
The question of why Wettlaufer killed or hurt 14 people loomed large in court. In a lengthy video statement she gave to police last fall, she said she felt a "red surging" well up in her chest that was relieved after she completed a kill. She believed she was an instrument of God at times, but also killed because some residents were too much work, too burdensome.
Many others, wracked by guilt, spoke of what-ifs.
"I simply feel guilty for not being able to protect my father as he had protected me," wrote David Silcox, whose father, James Silcox, was murdered in 2007.
Justice Bruce Thomas acknowledged that guilt was the common theme of the 28 victim impact statements filed in court a few weeks ago.
"It is a complete betrayal of trust when a caregiver does not prolong life, but terminates it," he said. "But you cannot blame yourselves."
Thomas described Wettlaufer's "free run" on her nine-year killing spree, with no oversight or even an inkling she had committed such calculated murders.
"Without her confessions, I am convinced these offences would never have been brought to justice," he said, calling Wettlaufer a "shadow of death that passed over them (the victims) on the night shift where she supervised."
For her part, Wettlaufer apologized, crouching in the prisoner's box without looking at anyone.
"I am truly sorry for the people I injured or murdered," she said in a soft voice.
"Sorry is much too small a word. I hope that the families can find some peace and healing."
Beverly Bertram, who is Wettlaufer's sole living victim, wrote about the physical pain she was in after the nurse injected her with insulin with the intent to kill her.
"It is really hard to describe, but I knew I was dying," she wrote in her statement. "I was doubled over in pain in my stomach...Just such pain. My whole body hurt...I thought I was screaming, but I was just moaning I guess."
Bertram wrote that she has become a recluse since the incident, afraid of everyone, including her own shadow, and has lost all relationships with her family.
"I truly think sometimes I'd be better off if she did her deed."
Shortly after Wettlaufer's sentencing hearing, the province announced it would hold a public inquiry into the murders to ensure a similar tragedy does not happen again.