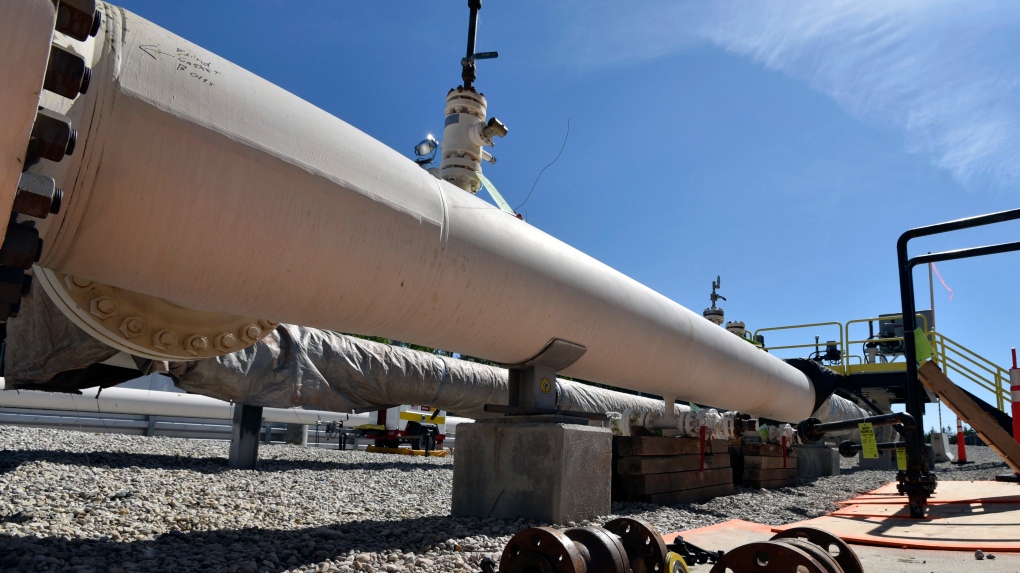 In this June 8, 2017, file photo, fresh nuts, bolts and fittings are ready to be added to the east leg of the Enbridge Line 5 pipeline near St. Ignace, Mich. (Dale G. Young/Detroit News via AP, File)

The Canadian company accused the state of overstepping its bounds, arguing that Enbridge’s Line 5 was under the sole regulatory jurisdiction of the U.S. Pipeline and Hazardous Materials Safety Administration.

“This is the latest attempt by the state of Michigan to interfere with the operation of this critical infrastructure by assuming authority it does not possess,” the company said in a statement.

In her Nov. 13 order to halt the flow of oil within 180 days, Whitmer said Enbridge had violated an easement granted 67 years ago to run a section of the pipeline along state-owned land below the Straits of Mackinac. Attorney General Dana Nessel sued in state court to enforce the Democratic governor’s requirement.

Enbridge filed its case in U.S. District Court in Grand Rapids, Michigan, underscoring its contention that the pipeline is a federal matter. It also submitted a notice seeking to transfer the state’s suit to the federal court.

Vern Yu, the company’s president for liquids pipelines, said the state should “stop playing politics with the energy needs and anxieties of U.S. and Canadian consumers and businesses that depend on Line 5.”

Whitmer spokeswoman Tiffany Brown said Enbridge’s suit “brazenly defies the people of Michigan and their right to protect the Great Lakes from a catastrophic oil spill.”

“In short, Enbridge claims it can continue to pump oil through the Straits of Mackinac indefinitely, posing enormous risk to our economy and way of life — and that the people of Michigan have no say in the matter,” Brown said.

The underwater section beneath the straits is divided into two pipes. Enbridge says they are in sound condition and have never leaked, while Whitmer contends they’re vulnerable to a catastrophic spill.

Whether the state is legally empowered to close the pipeline is a long-debated question.

In its termination notice, Whitmer’s office said the easement was wrongly granted in 1953 and violated the state’s public trust duty to safeguard its Great Lakes waters. A report by the Michigan Department of Natural Resources said Enbridge had failed to meet numerous safety standards.