Thousands of bikers were on hand from across Ontario and Michigan for the Bob Probert Memorial Ride.

It was an emotional day for Probert’s wife Dani as her sister Jacqueline Wood was the Grand Marshal.

Wood, best known for her role on the soap opera the Bold and the Beautiful, says it was Probert who got her interested in motorcycles.

“Bob was actually the one who taught me how to ride so it's a huge privilege and a big honour."

She says her first bike was a CBR 1100 and her first ride was with Probert on back.

"Just the visual of us, myself  on this huge bike and having this 6-foor-4  massive hockey player on the back riding through the streets. I'm sure a lot of parents were angry, but to this day it brings a smile to my face."

Probert died four years ago of a heart attack while on a boat on Lake St. Clair.

“It's bittersweet because it means it's been four years since I've seen Bob or we've heard his voice in the house for the kids. This is our shining day… to laugh to see friends, hear stories. This is what it's all about for us,” Dani Probert says.

The ride has raised more than $300,000 for cardiac care in Windsor-Essex.

Riders travelled down Ambassador and Malden Roads through LaSalle and River Canard and made stops at the Verdi Club, Colchester Bar and Grill and Parkside Grille before arriving at the Riverside Sportsmen’s Club. 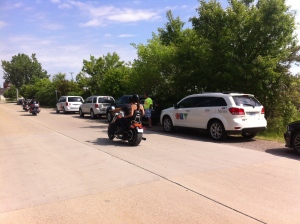