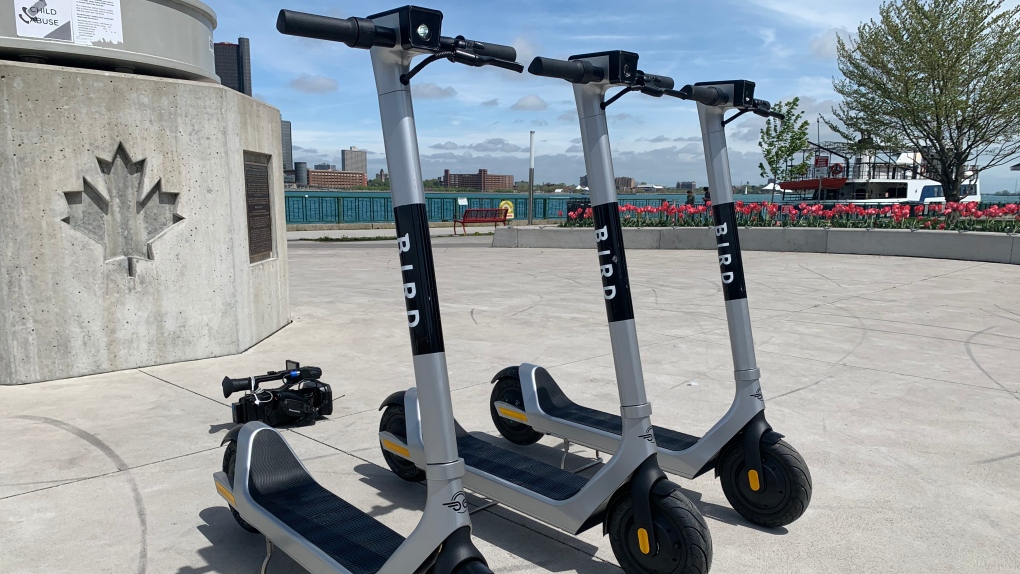 WINDSOR, ONT. -- After what Bird Canada officials are calling a very successful and record-breaking opening weekend of e-scooter deployment in Windsor, the company is also confirming about 10 per cent of the 200 scooters put out on city streets were stolen or vandalized.

“It’s not our first rodeo, we’ve seen this before,” says Bird Canada general manager Alex Petre. “I would say it has been a little more aggressive and a little bit faster than other cities.”

Windsor council approved a one-year pilot project for e-scooter use in town, making Bird Canada the exclusive operator in the city. The company also offers its service in Ottawa, Edmonton, Calgary and Kelowna.

Petre tells CTV Windsor while the vast majority of people were respectful of the rules and procedures around operation and use of the electric-powered mode of transportation, some clearly were not.

As a result, the company took some time Tuesday and Wednesday to gather them up, regroup and seek out the stolen scooters.

“We’re a Canadian company, we’re a local company, it does impact us if we lose them. So because of that we’re just taking yesterday and today to try to recover them and it might impact our deployment plans a bit,” Petre says.

She adds the units have GPS trackers, making them easier to find — which could include a visit from police for recovery of the stolen property.

“It has zero value to anyone who steals it. They can’t make it work for free, the parts are not easily reusable and the parts themselves are not that valuable,” says Petre. “What we usually see is people try to steal them and make something of them and when they realize there’s not a whole lot you can do with it, then the theft and vandalism goes down.”

The company plans to redeploy either later Wednesday or Thursday. 500 scooters will ultimately be delivered to Windsor under the pilot arrangement with the City of Windsor.

Petre reiterates that the scooters should be left outside after users are finished with their rides.

“Any number of stolen scooters means there’s that many less for riders to use because we can’t magically produce them,” says Petre.