A LaSalle woman is crediting emergency personnel for saving her dog after he fell into water at the bottom of a 15-foot storm sewer at Malden Park.

Mary-Jo McKinnon says she was walking her dog Lad in the park on Sunday afternoon when he fell into a storm sewer with the cement lid half off.

“I knew that I couldn’t get down there and how would I pull him up,” McKinnon told CTV News. “There’s no way he was giving up, but I was not leaving him.”

Realizing she wouldn’t be able to rescue the dog herself, she called 911 around 10:30 a.m.

She says Lad was standing on his hind legs to keep his head above the neck-deep water at the bottom of the manhole. He was shaking and yelping. She was hoping help would arrive fast before his legs got too tired and she worried he would drown.

She says the park should have mile markers, to make finding people in distress easier.

“The huge frustration is I was telling them, but I couldn’t get them to where I was at and it was a problem trying to pinpoint the spot. If we had mile-markers, they could find people more easily.”

When Windsor police, firefighters and EMS arrived, she waved them over to her location on the south trail that parallels EC Row Expressway.

McKinnon says Lad had been in the water for about 15 minutes.

Police say it was obvious the dog was freezing and in distress, so the officer climbed the ladder into the sewer and rescued the dog.

McKinnon says she is so grateful for the quick and heroic actions by police and EMS on scene.

“The relief was when he kind of looked around and said ‘I’m going down.’ There was no hesitation, no waiting,” says McKinnon.

The officer pulled up the 50-pound dog and climbed out the ladder on the storm sewer.

She thinks a snow removal crew must have moved the grate and didn’t realize it was partially open. She says she is thankful it ended well, but it could have been much worse.

McKinnon has taken Lad to the vet and says he is doing well. 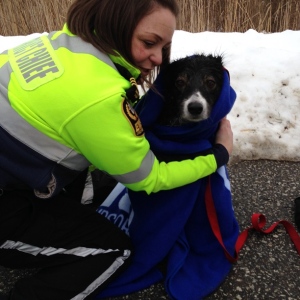