Demolition of Detroit Incinerator set to begin next month 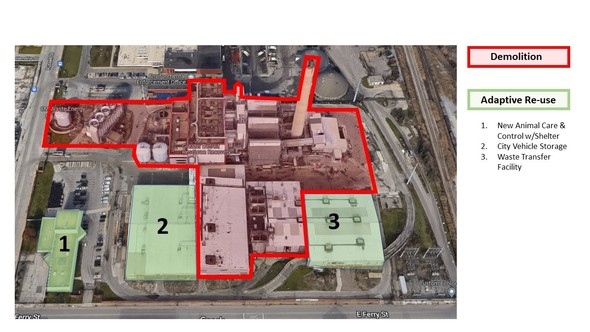 The Detroit Incinerator, which has been a source of air pollution and health concerns, for surrounding neighbourhoods is set to be demolished in June 2022. (Source: City of Detroit)

Demolition of the Detroit Incinerator, which was a source of air pollution and health concerns for nearby residents for 30 years, is slated to begin next month and finish by the end of the year.

On Tuesday, Detroit Mayor Mike Duggan announced that the “long-despised” incinerator would soon be cleared from the city’s skyline.

“The presence of this incinerator has been a real pain point for this community because it was another example of a health hazard being placed in a lower-income community of colour,” Duggan said in a news release. “We worked hard behind the scenes to get the incinerator shut down, and now residents of this neighbourhood will finally be able to say goodbye to it forever.”

The incinerator faced heavy criticism since it opened in 1989 at a cost of around $500 million until its closure, due to pollution and health concerns generated by the facility.

Officials said during the last five years of its operation, the incinerator reportedly exceeded pollution emissions more than 750 times, according to state environmental records.

Along with impacting surrounding neighbourhoods in Detroit, the incinerator affected some Windsor areas as odour and emissions were carried across the river by the prevailing wind.

Local environmentalists are breathing easier knowing the facility is being torn down.

“When it stopped operation we celebrated and hoped it would never open again,” said Derek Coronado, research and policy coordinator with the Citizens' Environment Alliance.

“Given the wind patterns, it impacted Windsor neighbourhoods, not to mention affected water quality of the Great Lakes.”

Coronado said environmentalists were surprised the incinerator was allowed to open and operate at a time when environmental consciousness was growing, adding it ran for three decades in violation of environmental regulations.

“It was constructed without effective environmental emission control measures, it did not have an advanced system, and was ordered to retrofit,” he said.

He believes the retrofit was costly and one of the reasons Detroit fell into bankruptcy.

Duggan said the demolition will start with the trash processing portion of the complex, and lead to the implosion of the smokestack later this year.

The demolition process is expected to be completed within six months of getting started.