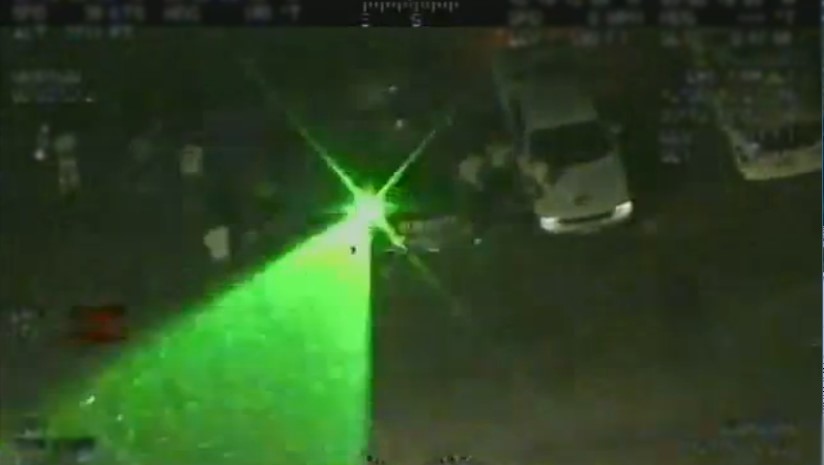 U.S. Customs officials say a Great Lakes Air and Marine crew detected their aircraft was being targeted by a green laser on Wednesday, June 3, 2020. (Courtesy U.S. Customs and Border Protection)

WINDSOR, ONT. -- Windsor police have arrested a suspect after a U.S. Customs and Border Protection Air and Marine Operations helicopter was struck by a laser beam while conducting operations over protests in Detroit.

U.S. Customs officials say a Great Lakes Air and Marine crew operating near the Renaissance Center experienced a “dangerous situation” after detecting their aircraft was being targeted by a green laser around 10 p.m. on Wednesday.

The crew immediately positioned the aircraft camera system on the point of origination, which was being emanated from Windsor and contacted the Windsor Control Tower to report the incident.

The air interdiction agent in command of the aircraft was able to relay the exact location of the perpetrator, which the control tower relayed to Windsor police.

The crew was then able to maneuver the aircraft along the Detroit River while keeping a constant visual on the subject until Windsor police arrived and took the subject into custody.

“The Windsor Control Tower acted as a continuous relay to the police as the aircrew vectored them to the subject’s position which was critical to making this apprehension,” said Marc Sledge, director of air and marine operations with the Great Lakes Air and Marine Branch. “I am very thankful that our pilots were not injured in this incident and that our Canadian counterparts were there to assist us at a moment’s notice.”

Border officials are reminding the public is reminded that lasers present a serious risk to aviator safety and can cause pilots to suffer flash blindness and other sudden vision problems, as well as permanent vision damage. Laser incidents also threaten the safety of innocent people on the ground.

U.S. Customs would also like to remind residents that owning a hand-held laser isn't illegal, but shining it into a cockpit of an aircraft is a federal crime. Someone convicted of interference with an aircraft can face 20 years in prison and a $250,000 fine.