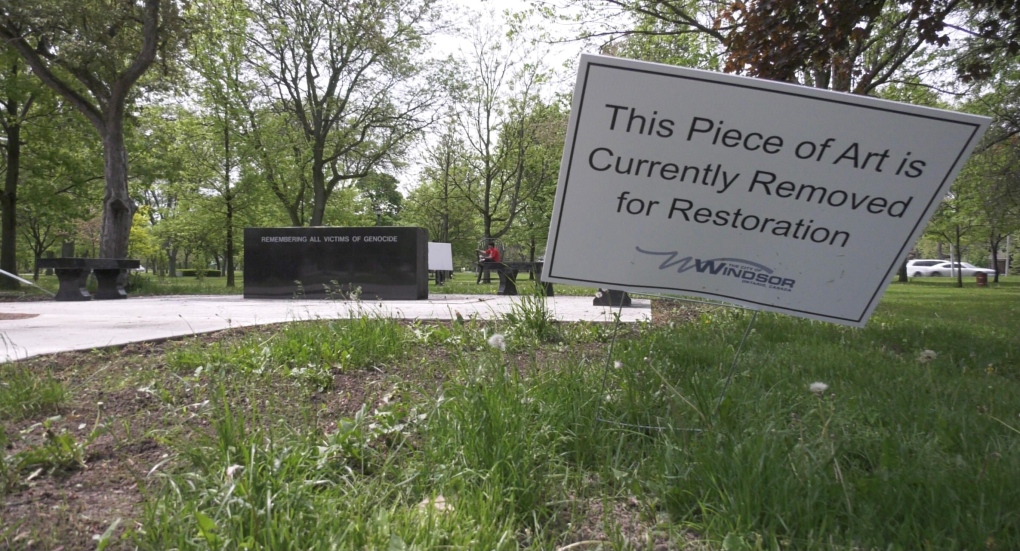 The plinth is ready for the Ukrainian Holodomor Memorial to be reinstalled in Jackson Park. (Michelle Maluske/CTV News Windsor)

On Friday, the International Union of Operating Engineers ratified a new three-year contract, ending the strike that started in late April.

“Members across the province in every area voted to accept the settlement and go back to work,” Local 793 Business Manager Mike Gallagher wrote in a news release.

In Windsor, it’s welcomed news because the city was waiting on a crane to finish two projects: the Fontainebleau Park splash pad and reinstallation of the Ukrainian Holodomor Memorial at Jackson Park.

James Chacko, executive director of parks and recreation for Windsor said Saturday he’s not sure how long the list is of outstanding projects needing a crane operators’ specialized skill set.

“We'll do everything we can to try to pull some strings and get our projects moved forward. But we will be at the will of the companies to ultimately complete the work," said Chacko.

At Jackson Park, the city had to remove the granite monument because the concrete beneath was sinking. New concrete is now in place and benches reinstalled, awaiting the monument itself.

All the parts are in place for the $400,000 splash pad on the city’s east end as well. They just need a crane to drop the water pump mechanism into a pit, and then a building will be installed on top to protect the equipment from the elements.

“It takes about five to seven days to actually just install everything else into it,” said Chacko. “You have the splash pad sitting there. You have the water service from the road, but you need that mechanism in-between to feed the water into the splash pad.”

The campaign for Patrick Brown said it was consulting its legal team after the leadership election organizing committee of the federal Conservatives voted to disqualify him from the race late Tuesday.

Despite fears of arrest, some Russians refuse to halt war protests

Despite a massive government crackdown on protests against the war in Ukraine, some Russians have persisted in speaking out against the invasion.

A man charged Tuesday with seven counts of murder after firing off more than 70 rounds at an Independence Day parade in suburban Chicago legally bought five weapons, including the high-powered rifle used in the shooting, despite authorities being called to his home twice in 2019 for threats of violence and suicide, police said.