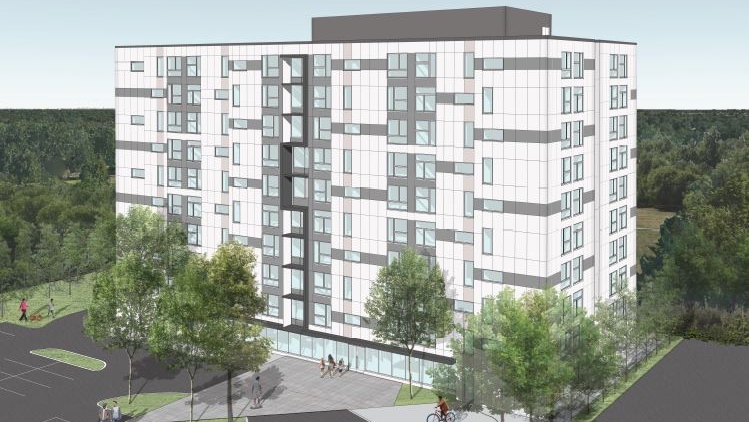 WINDSOR, ONT. -- The affordable housing project at 3100 Meadowbrook Lane in Windsor is moving forward thanks to a renewed council commitment after a funding snag threatened to put the brakes on the ambitious plan.

At a special meeting on Monday, council approved an increase of its municipal guarantee from $15.5-million to $20.5-million to back a larger repayable loan from the Canadian Mortgage and Housing Corporation (CMHC) in addition to a non-repayable loan towards the project.

The new building, which will add 145 new housing units in the city including 76 affordable units, has come in over its projected cost of nearly $39-million – requiring the increased CMHC loans. The exact figure remains confidential as the Windsor-Essex Community Housing Corporation (WECHC) and its construction manager for the project, Amico, work to finalize its agreements with sub-contractors.

A report to council highlighted the “high degree of risk” the project faced should the additional funding not be finalized — going so far as to suggest the project would not be completed without it and all federal and provincial funding would be forfeited.

“We wanted this building to be built and if it meant we had to beat more bushes and had to make a number of more phone calls; we would have,” said Kari Schofield, the Public Affairs Manager for WECHC.

The project initially called for 150 units but, instead will now be reduced by five to accommodate larger units which can be used by Community Living Windsor to support its clients. There will be 12 units dedicated to Hiatus House and another five will be for the use of Family Services Windsor-Essex. A total of 20 per cent of the units will be fully accessible.

Schofield adds the plan will see outdoor spaces created for neighbourhood use to help integrate the new building into the existing community.

The building will also be the first WECHC built to passive house standards which is expected yield a 40 per cent improvement in energy efficiency and a 33 per cent reduction in greenhouse gas emissions.

Ward 3 Councillor and WECHC board member, Rino Borotlin, praised WECHC and city administration for navigating the complex situation which sees funding coming from both federal and provincial levels of government.

“What you’re seeing is a fantastic project,” said Bortolin. “What you’re going to see is a perpetually more affordable unit as people enter the units and live in there for years to come.”

According to Windsor Mayor Drew Dilkens, the item was brought before council in a special meeting instead of a regular meeting to avoid lost time.

“Let’s get this in front of council so we can sign the agreements and get the project moving,” said Dilkens. “I figured it would be fairly quick so we can get this thing rolling so we don’t lose another week in the process.”

Schofield expects sub-contractor agreements to be finalized in relatively short order, which will then be followed by noticeable progress at the site.

“Where we’re at now is probably closer to Winter 2020, this year, we will actually start to see some of the suspended flooring being put into place,” said Schofield.

The project completion date has been delayed to August 2022.​