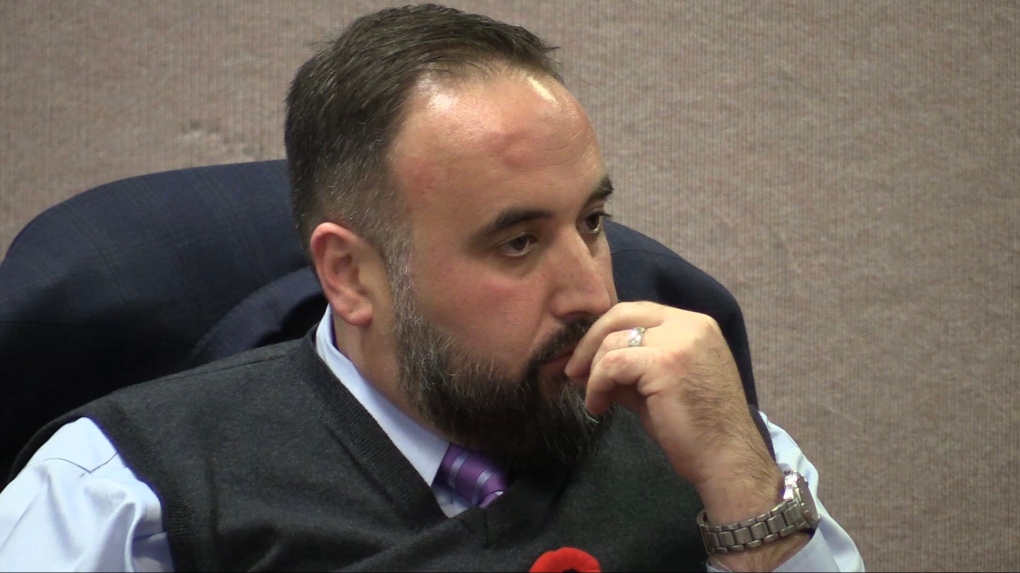 Ward 3 Coun. Rino Bortolin listens at a council meeting on Nov. 6, 2017, as his colleagues vote to invoke integrity commissioner to investigate comments he made in the newspaper. (Rich Garton / CTV Windsor)

Windsor City Council will get an apology from downtown Coun. Rino Bortolin over comments he made to the media last year.

"I respect the decision of council, as I always have done,” Bortolin told reporters after the meeting Monday. “A decision has been made, they've sanctioned me, they're asking for an apology, which I will give, probably at the next meeting of council."

The comment in question was made to a Windsor Star reporter in October of 2017, where Bortolin said, "When I have to continually go back to residents and say there is no money for a $3,000 alley light where the person got beat up and raped last week, it’s hard."

Bortolin made the comments after council approved millions in spending on Bright Lights Windsor and the restoration of an historic street car.

Windsor’s Integrity Commissioner Bruce Elman told council that Bortolin violated multiple sections of the council code of conduct with his choice of words, but also that the remarks were disparaging of a council decision after it was made.

“There’s no dispute as to what the councillor said. There’s no dispute that what he said was false,” said Elman. “There is also no doubt that words matter, and in my view, these words constituted a violation.”

Majority of council supports the recommendation

Coun. Fred Francis made the motion to accept Elman’s report, which called for an apology from Bortolin, but stopped short of any sort of suspension from council. Council passed the motion 7-1, with Coun. Chris Holt the lone dissenter. Coun. Bortolin couldn’t vote due to conflict, and Councillors Irek Kusmierczyk and Bill Marra were absent from the meeting.

“I think the integrity commissioner’s findings were very clear, I agree with them, I think words do matter,” Francis said during the presentation.

“A statement was made and it was either known to be false, or it was made in hyperbole,” said Francis. “At the very least, of whatever else we agree or disagree on, can we all agree that we should not use rape as hyperbole?”

Other councillors tonight spoke about the how spreading "false information" about crime in the downtown can harm investment.

Even the integrity commissioner’s report indicated Bortolin’s statement might be taken as hyperbole in Windsor, but might be viewed differently in California, Calgary, Copenhagen or Cairo.

Dilkens noted the code was written for a reason, and although it’s not a fun exercise for council, it’s the appropriate action to take.

“Ultimately, we have a responsibility to ensure that the public has a confidence in a municipal council, that they have confidence in public safety and their police service. And the question that I pose back to you is why would any of us do anything that undermines that?”

“The short term political gain by this type of comment is vastly overshadowed by the long-term damage that it does to the city,” Dilkens said.

Coun. Bortolin says serious crime is taking place in dark alleys downtown -- and that his comments reflected the frustration being felt by residents.

“A man was shot in the head in a dark alley. I woke up one morning and answered a phone message on my voicemail about a man whose brother found a dead body in an alley with no lights, and we want to talk about where people are going for pizza?”

Bortolin said residents are frustrated, and he’s trying to represent the people who put him in office.

"I'm here listening to councillors and the mayor speak about they care about investors in Cairo, California, Copenhagen. You know what? I care about the people on Caron, Carl, on the streets of downtown, and the alleys that abut those streets,” Bortolin said.

Bortolin hired lawyer David McNevin of Millar Canfield to look into launching a judicial review of the intrgrity commissioner's decision.

"I don't think that's what the purpose or intent of the integrity commissioner is, they're not there to be effectively the speech police," McNevin told reporters before the weekend.

McNevin said he will likely push forward with the judicial review.

"Is it the law in Canada and the province of Ontario, that once a decision's been made by council it can never ever be criticized by anyone? I think that makes absolutely no sense."

McNevin believes there is political grandstanding at play, while the legal aspects of Bortolin's case are being missed.

"This is an issue where I believe Coun. Bortolin is being unfairly railroaded by this process without a chance to go to court to seek a judicial determination, and that's really an injustice, in my view," McNevin said.