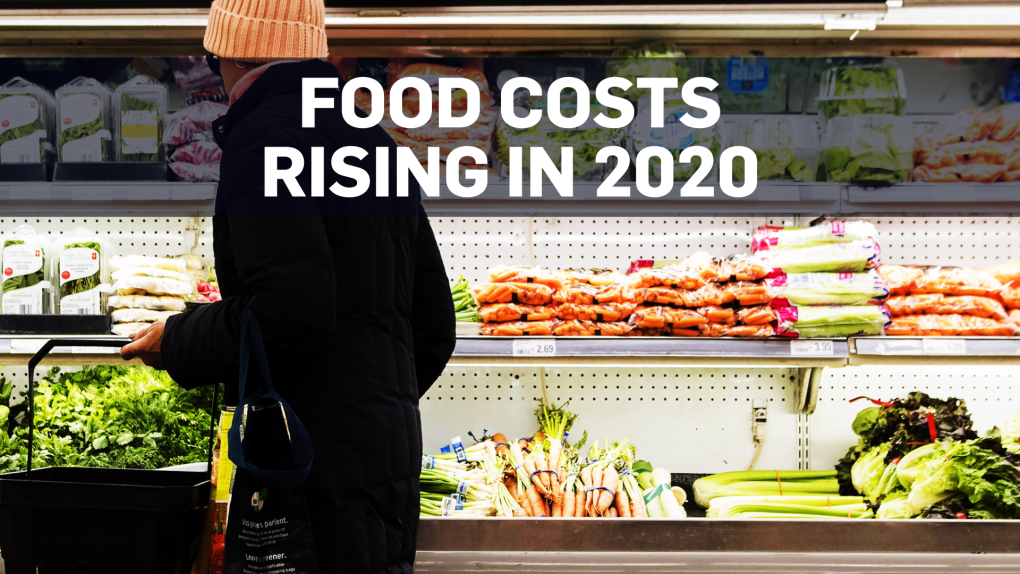 OTTAWA -- The average Canadian family will pay up to an extra $487 on feeding themselves next year, according to an annual food price report that highlights climate change as a major culprit for rising food prices, especially in the produce department.

Unexpected snowstorms, droughts and other weather events have impacted crops and food prices in the past, said Simon Somogyi, lead researcher from the University of Guelph.

But for 2020, he and others behind the report highlight climate change as the cause.

"We're deliberately pointing out that, you know: climate change is causing the droughts, is causing the bad snowstorms that's impacting prices," he said.

The report calls the impact of changing weather patterns on our food systems through droughts, forest fires, heavy precipitation, reduced freshwater access and rising sea levels "the elephant in the room" for 2020.

"Canadian farmers will face challenges in the future dealing with unpredictable crop yields, heat-wave livestock threats, pasture availability, and pest and disease outbreaks," reads the report from researchers at Dalhousie University and the University of Guelph.

That link between climate change and food prices comes along with a forecast that the average Canadian family will spend $12,667 on food at grocery stores and restaurants in 2020.

That's two to four per cent more than in 2019 -- thought the researchers expect it to be closer to the top end of that range. It's the second-highest prediction since 2013. It's outdone only by an anticipated three to five per cent, or $420, rise for the year 2017. The algorithm provides a two-per cent range for the national forecast.

The expected rise in food prices comes as Canadians face relatively steady inflation. The consumer price index rose 1.9 per cent year-over-year in October, according to Statistics Canada -- the same increase as the previous two months. Increases have remained below 2.5 per cent since Sept. 2018.

Next year, researchers expect price increases in all eight food categories they track with the biggest jump -- four to six per cent -- in meat.

Pork prices will likely lead that ascent due to the African Swine Fever outbreak in China roiling pork markets.

Food sold at restaurants, as well as seafood and vegetables, will likely see the next biggest price increases in 2020. The report estimates a jump of two to four per cent in those three categories. The estimated rise in vegetable prices comes after a staggering 12 per cent increase for the 12 months ended Sept. 2019. Much of that double-digit jump Somogyi attributes to climate change.

Storms and other weather events wreak havoc on logistics, he said. They can slow down transportation, for example, and create a shortage that results in higher prices.

A hotter climate is one factor behind an increase in bacterial outbreaks such as E. coli, Somogyi said, as hotter temperatures and unpredictable heat waves increase bacterial growth. In recent years, multiple E. coli outbreaks prompted grocers to pull romaine lettuce off their shelves and restaurants to stop serving the leafy green. That tends to drive up prices for alternatives, like spinach.

Produce prices also trend up because Canada imports vast amounts of its food as the colder weather in the country limits what can be grown. Imported goods can fluctuate in price due to trade issues creating slowdowns at borders or weather events impacting delivery logistics.

Food trends can also prompt big swings. This year, celery costs skyrocketed partly due to a fad diet based on purported health benefits of celery juice. In May, one major Canadian grocer advertised celery stalks for $5.99 online -- compared to a more typical, roughly $3 per kilogram cost for much of the years prior to April 2018, when Statistics Canada stopped tracking the vegetable.

It's difficult to put a number on how much of the anticipated 2020 food price increase comes from climate change, said Somogyi, but it is responsible for "the bulk" of last year's vegetable sticker shock. In the case of the catapulting celery costs, months of unseasonably cold weather and heavy rainfall in California created supply issues.

But the stability of food supply isn't climate change's sole casualty, as it sparks changes to demand too, said Sylvain Charlebois, lead author from Dalhousie University.

"People, when they think about food, they see the planet on their dinner plates much more so than ever before," he said.

Younger generations especially decide what to eat in part by looking at the environmental impact of their meals, said Charlebois, and turn more toward full or partial plant-based diets. Fast-food chains and manufacturers raced to stock and create products to feed this demographic with Beyond Meat and Lightlife alternatives now ubiquitous at restaurants across Canada.

In particular, he'd like to see a national food policy that focuses on producing more high-cost items, like many vegetables, in Canada through vertical and indoor farming. That would reduce time to market, costs and risks of bacterial outbreaks, he said.

"If we maintain our current food, Canadian food distribution structure, I can see that happening each year -- four per cent, 10 per cent, 15 per cent," he said.

The federal government released a long-awaited food policy in June 2019 -- the first in Canada -- after starting public consultations in 2017. It addressed four significant areas for short- and long-term action to support the policy's goals. These include boosting community access to healthy food, making Canadian food a top choice domestically and internationally, supporting food security in Northern and Indigenous communities and reducing food waste.

The department is also exploring vertical and container agriculture beyond the food policy, he said, pointing to a Aug. 2017 workshop it held where experts identified research and development needs in this area.

Agriculture Canada is working with others to optimize these farming systems so they can complement traditional ones, he said.

This report by The Canadian Press was first published Dec. 4 2019.