City showcases some of the $2.2-million upgrades in Forest Glade Optimist Park 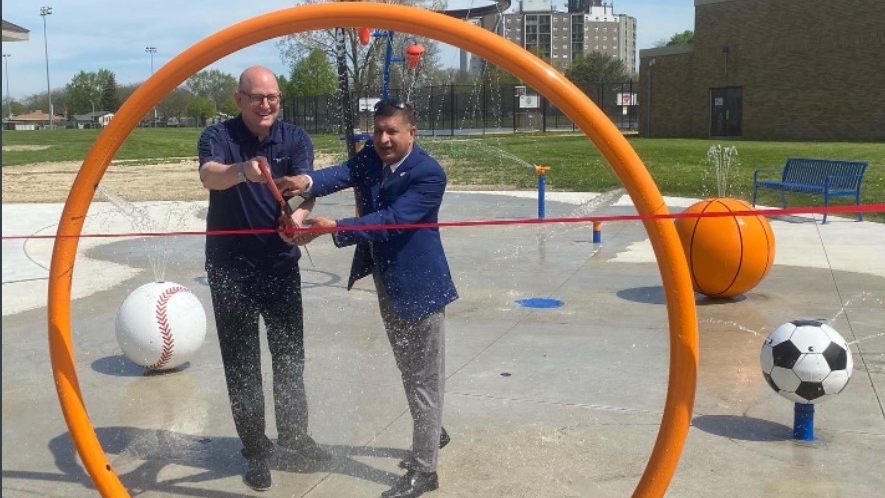 Windsor mayor Drew Dilkens and Ward 7 councillor Jeewen Gill are highlighting the latest attractions and amenities that were part of the $2.2-million upgrades at Forest Glade Optimist Park.

A new sports-themed splash pad and fully accessible washroom facility will be open ahead of the Victoria Day long weekend May 20-23.

The $750,000 investment is part of a $2.2-million sports and recreation upgrade in the area. Further park upgrades are underway with $50,000 going towards installation of security cameras to help monitor park activity.

“This space is home to many activities and programming suitable for all age groups from across the city. City Council remains committed to enhancing infrastructure at this park to ensure top-of-the-line amenities are available to support our growing city,” said Dilkens.

Great news this morning as @JeewenGill & I unveiled a new, fully accessible washroom & splash pad at Forest Glade Optimist Park. We are committed to keeping this 30-acre space as a central hub for all things recreation in Ward 7! #DeliveringResults https://t.co/3MHNftLMLE pic.twitter.com/arqXLvR4bH

This work is a continuation of the extensive renewal project at Forest Glade Optimist Park that began with the addition of two basketball courts and a multi-purpose sports court featuring a specialized tile surface. In addition, $200,000 in upgraded LED lighting has been installed throughout the park replacing the decades old lighting.

Next up is the completion of the installation of new pickleball and tennis courts where the old tennis courts were previously located. That $850,000 enhancement is expected to be completed by the first day of summer.

“As summer fast approaches, we are excited to share that improvements to Forest Glade Park have been completed,” said Gill.

New catch basins have also been installed in and around the parking lot area, where the final lift of asphalt paving will be the final touch, adding an additional $200,000 in improvements.

A leaked draft showing that the U.S Supreme Court justices are preparing to overturn the Roe v. Wade abortion-rights ruling has sparked debate in Canada, including whether Catholic hospitals can impede your access to abortion.

Saskatchewan’s Nakaylia Tudway-Cains is one of many mothers in Canada feeling the strain of the ongoing baby formula shortage, and she says she's now paying $400 a month for special over-the-counter formula she needs for her allergic son.