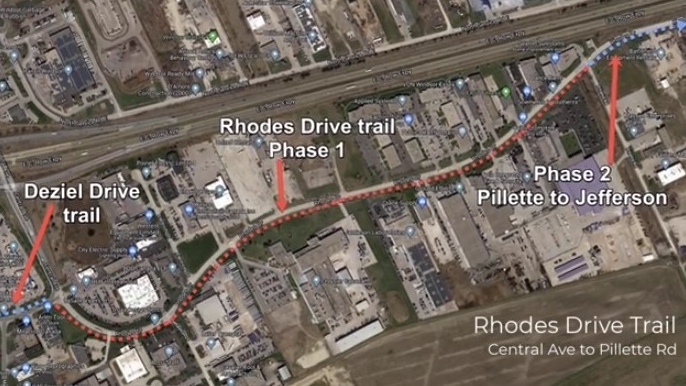 City of Windsor officials are celebrating a $3.6-million investment in 6.7 kilometres of new cycling trails in the city.

“Another terrific investment and expansion of the multi-use trail system we have created in Windsor. This is wonderful news with more to follow to continue making our city more active, rideable and walkable,” said Kaschak.

The Rhodes Drive trail adds nearly four kilometres of active transportation infrastructure to make cycling safer and more convenient in industrial and commercial business areas on the city’s southeast side.

The trail also closes a critical gap in the Windsor Loop to offer cyclists a safe crossing over the CP Rail track at the intersection of Rhodes Drive and Jefferson Boulevard.

The Windsor Loop is a 42.5-kilometre multi-use trail around the perimeter of the city that links neighbourhoods and provides cyclists with access to the Trans Canada Trail. With the exception of a few sections, a majority of the loop is complete.

The Rhodes Drive trail is the latest and final project to be built thanks to a $3.6-million investment shared by the City and the Government of Ontario to increase commuter cycling infrastructure in Windsor. A $1,671,508 contribution through the Ontario Municipal Commuter Cycling (OMCC) program, combined with a $1,934,255 investment from City Council, created 6.7 kilometres of new bike trails between 2018 and 2021.