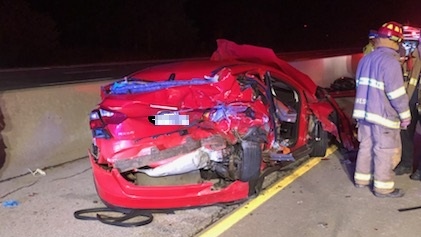 Four vehicles ended up damaged and two people were taken to hospital after a car hit a deer on Highway 401 in Lakeshore.

Essex County OPP responded to a multi-vehicle collision on Highway 401 east of Highway 77 at approximately 10:20 p.m. on Sunday.

Police say a small red car struck a deer while eastbound on Highway 401 coming to rest in the middle lane having sustained extensive damage.

A second vehicle then sideswiped the first and then struck a transport truck. A minivan then rear-ended the first vehicle, causing further damage.

The second and third vehicles sustained minor damage and the drivers of those vehicles were not injured.

The driver of the red vehicle was taken to hospital with serious but non-life threatening injuries.

The driver of the minivan was transported to a local hospital for treatment of minor injuries.

Highway 401 was closed for several hours while the vehicles were removed.