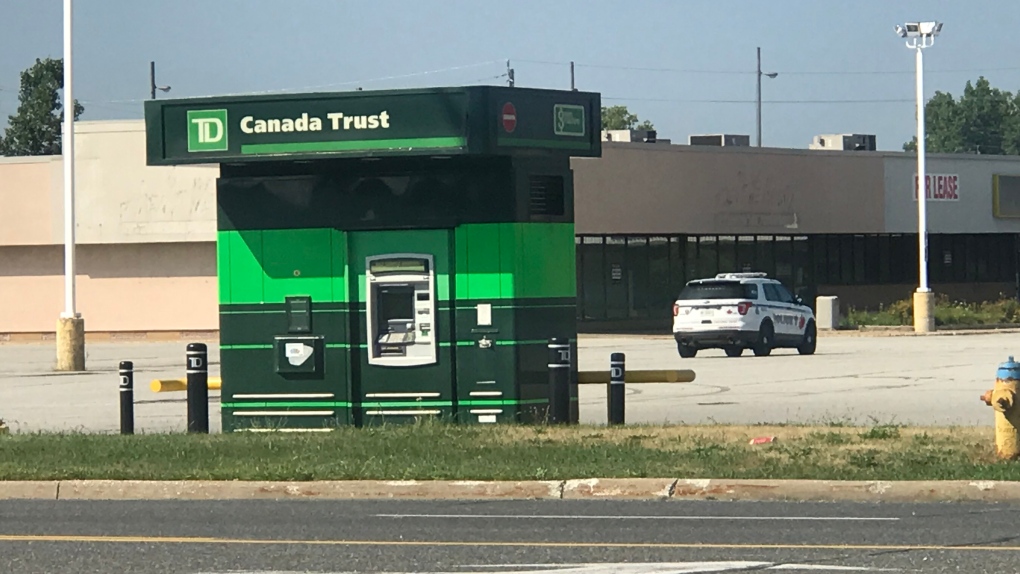 Police are investigating after an armed robbery at an ATM on Dougall Avenue in Windsor, Ont., on Friday, Aug. 3, 2018. (Alana Hadadean / CTV Windsor)

Windsor police say the canine unit and a witness helped catch two suspects after an armed robbery at an ATM on Dougall Avenue.

Police say it happened at the TD drive-thru on Dougall, just north of Eugenie Street at 1:15 a.m. Friday.

Officers arrived and spoke to a 41-year-old woman, who stated that she was robbed at gun point while at a nearby drive thru bank machine in the 2400 block of Dougall Avenue.

She said that two unknown males approached her vehicle while she was attempting to make a transaction.  One of the suspects allegedly brandished a handgun.

A witness was driving in the area and observed the commotion.

The witness spoke to the victim, learned of the incident and followed the suspects.  He pointed out the last direction of travel to responding patrol officers.

The canine unit arrived and began a track for the suspects. With the assistance of canine Hasko, two suspects were located near a building in the 2400 block of McDougall Avenue. They were both placed under arrest without further incident.

There were no reported injuries or money obtained by the suspects.

Officers continue to investigate the involvement of additional suspects and outstanding firearm.

Investigators from the Major Crime Branch continue to investigate the incident.

Abdulwahab Taher, 19, from Windsor, is charged with robbery with a firearm and have face mask/disguise with intent to commit an indictable offence.

Anthony Kan-Elliott, 19, from LaSalle, is charged with robbery with a firearm and have face mask/disguise with intent to commit an indictable offence.