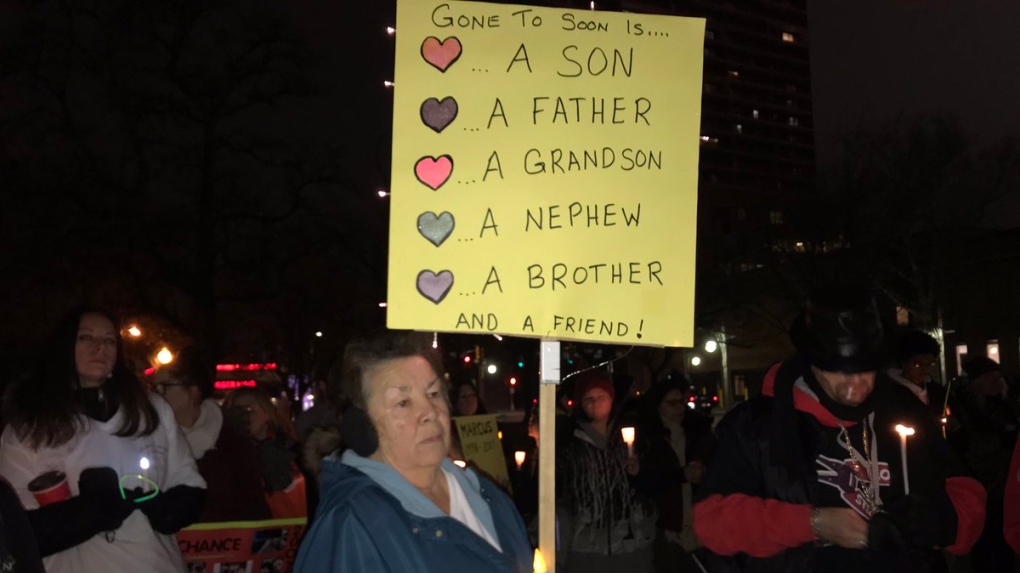 A woman holds a sign at a vigil to remember the victims of violence on November 28, 2018. ( Alana Hadadean / CTV Windsor )

Hundreds of people gathered in Windsor to remember nine young victims of violence.

Those in attendance included family and friends of the victims as well as strangers who wanted to support the movement.

Co-organizer, Lisa Valente tells CTV Windsor something must to be done.

The candlelight vigil was organized by the Parents Against Violence and Bullying group, including Carolyn Crankshaw, the mother of Darrion Moffat.

Crankshaw tells CTV Windsor she wants to use her son's death to raise awareness and plans to speak in schools about the consequences of gun violence.

"I'm just hoping that we can make a difference here today and bring notice to all the violence going on in the city.” says Crankshaw. “We need to definitely do something about it and I'm hoping that something will be done in the schools. Figure out why are they having guns and knives in their hands. They're young kids. That should be the furthest thing from their mind."

There have been ten murder investigations in the City of Windsor in 2018 – nine homicides and one manslaughter case.

Some of the names read during Wednesday’s vigil were Darrion Moffat, Chance Gauthier, Jason Solomon, Jerson Calero, Bryce Hall and Autumn Taggart. All six were murdered in 2018.

The names of three other victims – Dallas Nelson, Marcus Pierce and Jarvas Anthony Scott – were murdered in 2017.