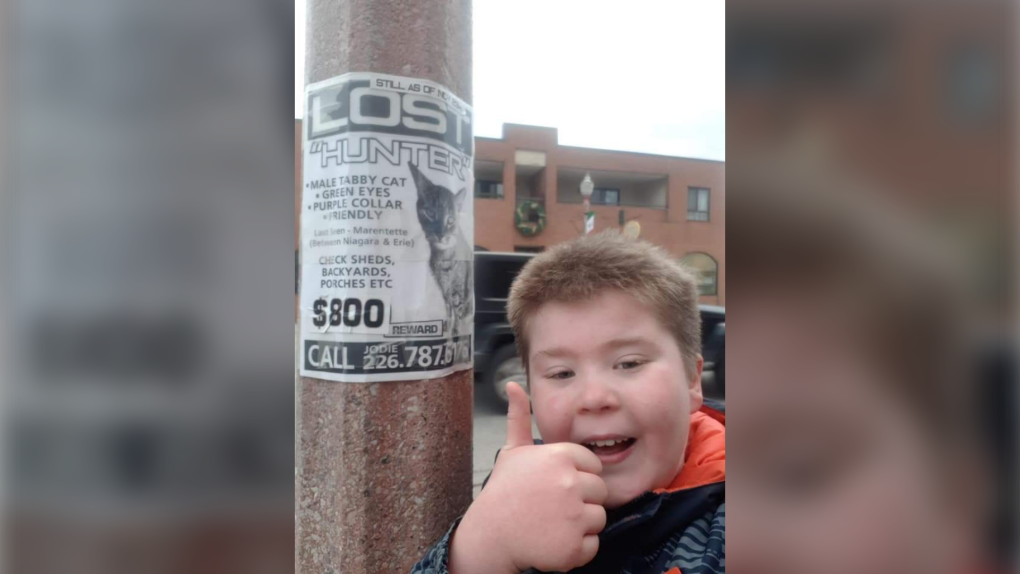 Braiden Benszsat, 9, stands with a missing cat poster for "Hunter" the animal he found after 74 days missing. (courtesy Gina Henderson)

WINDSOR, ONT. -- A nine-year-old boy is being regarded as a hero, after finding a missing cat.

“Well, I feel like I did a good thing because I made some people happy,” said Braiden Benszsat, who helped find Gina Henderson’s cat “Hunter.”

Henderson had posted flyers all around Windsor’s Little Italy neighbourhood after the cat was let out of the house.

Initially, she was offering a reward of $100, but after her search went viral, the community started to pitch in.

The financial reward climbed to more than $1,000.

After 74 days, Braiden found the cat and Henderson delivered the money to the young boy on Saturday.

“The community coming together and all the comments, 500 comments saying Braiden is a hero and how many people are happy for us and needed to hear this right now to get through this time, you just don’t realize how far it went and how many people it touched and how connected we all are,” Henderson said.

She tells CTV Windsor Hunter is in rough shape, but headed toward a recovery.