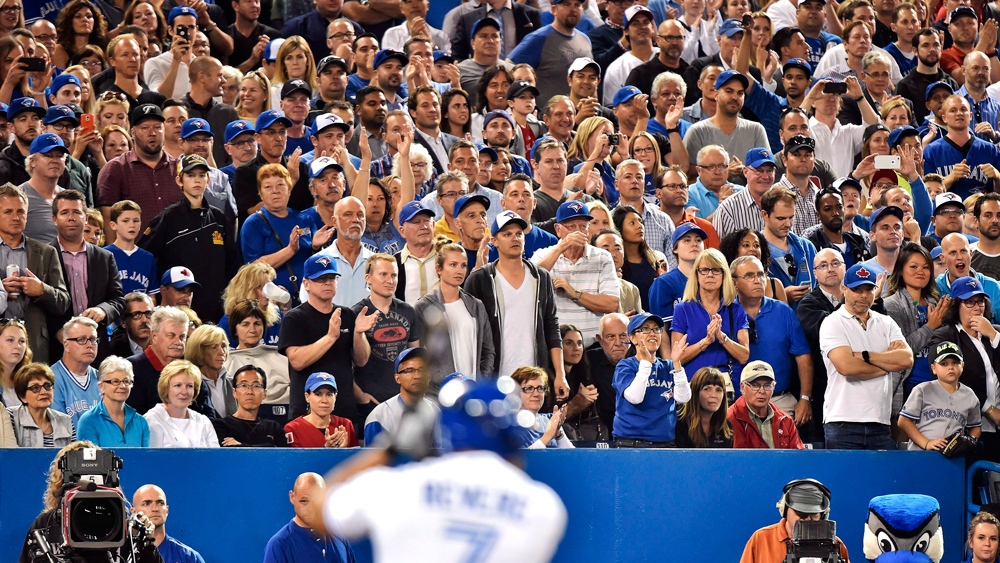 TORONTO -- Blue Jays fans descended upon Toronto from across the country to take in the team's first post-season game in 22 years.

The noise of the crowd -- a sell-out with 49,834 waving white towels -- reverberated off the closed dome of the Rogers Centre. Fans tried, but failed, to will their team to victory as the Jays lost 5-3 to the Texas Rangers.

Dozens interviewed by The Canadian Press before the game said the Blue Jays will crush the Rangers and won't stop until they win the World Series.

For Glenn Smith, it's been a long road back. Smith and his friend, Norm Bassett, said they drove from Hay River, N.W.T. to Edmonton -- a drive of more than 1,000 kilometres -- before hopping on the red-eye flight to make it to Toronto a few hours before the opening pitch.

Smith, clad in a full Blue Jays uniform with grass stains on "legit retro Jays pants that were probably worn by Kelly Gruber or Dave Winfield," was delirious. Delirious with joy, but mostly delirious because he hadn't slept in more than two days, due to his commute.

"But we're ready, ready for two games, then we gotta go back home and get some turkey in us," Smith said, adding Tim Hortons iced cappuccinos were keeping him and his friend alive.

"We did, we got those, got fifth deck tickets, but thought that wasn't good enough, so we upgraded to tickets in the lower bowl," he said.

"We decided after 22 years its worth it, we gotta spend the money."

Smith figures he won't actually complete the purchase of his season tickets for next year, but instead will just give up his deposit.

Angela Gleason and her husband, Michael, drove in from Barrie, Ont., finally back in town for a playoff game. They said they were at a bunch of post-season games in 1992 and 1993 when the team twice won the World Series.

Gleason said the game "means everything" to them.

"We finally have a great team to cheer for -- not that the Leafs aren't great, but here we have some promise."

Dan Rennick came with his son from Edmonton for the big game.

For Smith, like most in attendance, the game was a bit of a ride.

"No good. Not good at all," when asked how he felt after the Jays offensive leader, Josh Donaldson, left the game with an injury.

But he regrouped quickly after the game, confident that game two's starting pitcher, Marcus Stroman, would lead the team to victory.

"I'm from the Northwest Territories and I can tell you the fever is throughout the country right now and I'm just glad we have the chance to get down here."