Windsor police say they are investigating an "apparent homicide" of a man near Aylmer Avenue and Brant Street.

Officers were called on Thursday morning at 9:30 a.m. regarding a dead male located in an alley in the 500 block of Aylmer Avenue.

Police attended the scene and spoke with two men, who discovered the body upon arriving at the rear of a residence they were working at.

The body was in an alley behind 563 Brant Street.

Officers at the scene have described signs of obvious trauma to the victim and are treating the death as an apparent homicide.

A post mortem examination is likely to be performed on Friday in London.

Officers at the scene are conducting canvasses and are gathering evidence in relation to the incident.  Police were continuing with efforts to confirm the identity of the victim. 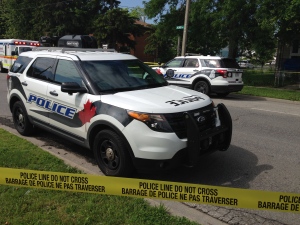