Another Highway 401 crash raises concern among group pushing for barriers 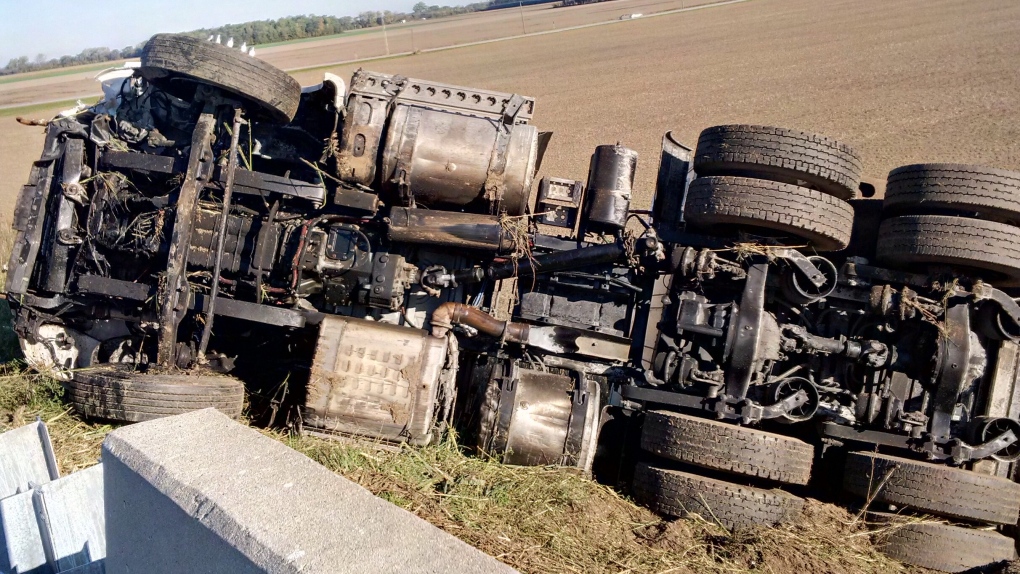 This tractor trailer rolloved over on Highway 401 near Dillon Road in Chatham-Kent, Oct. 17, 2017. (Chatham-Kent OPP)

There are more calls for concrete barriers along Highway 401 in Chatham-Kent after another crash.

A tractor trailer crashed through a metal guardrail on the 401 near Dillon Road Tuesday morning. The 50-year-old driver from Windsor was not seriously hurt and has been charged with careless driving.

But the group “401 Barrier Now” says the crash has raised anxiety and concern about safety measures currently in place.

“This reinforces our position that the Ministry of Transportation needs to take a serious look at the road safety situation on the 401 in Chatham-Kent”, states Alysson Storey.

She is a concerned citizen from Chatham-Kent, who is part of a group currently advocating for increased safety measures including concrete median barriers and expansion to three lanes between Tilbury and London.

“Every driver on the 401 deserves to be protected from other drivers and vehicles when they’re in distress” says Storey.

There have been five fatalities in collisions on Highway 401 between Tilbury and London in the last six months, along with numerous crashes that caused significant property damage and road closures.

“This underlines our concern that transport trailers are very large vehicles that require strong barriers to keep both their own drivers safe, and the drivers around them” adds Storey.

The Ministry of Transportation says it plans to install high tension cable barriers next year. The barriers are less costly and could be installed sooner than the concrete option.

But Storey doesn’t think that is good enough.

“Concrete median barriers are the safest and most effective type of barrier that can protect all drivers, tractor trailer drivers included” says Storey.