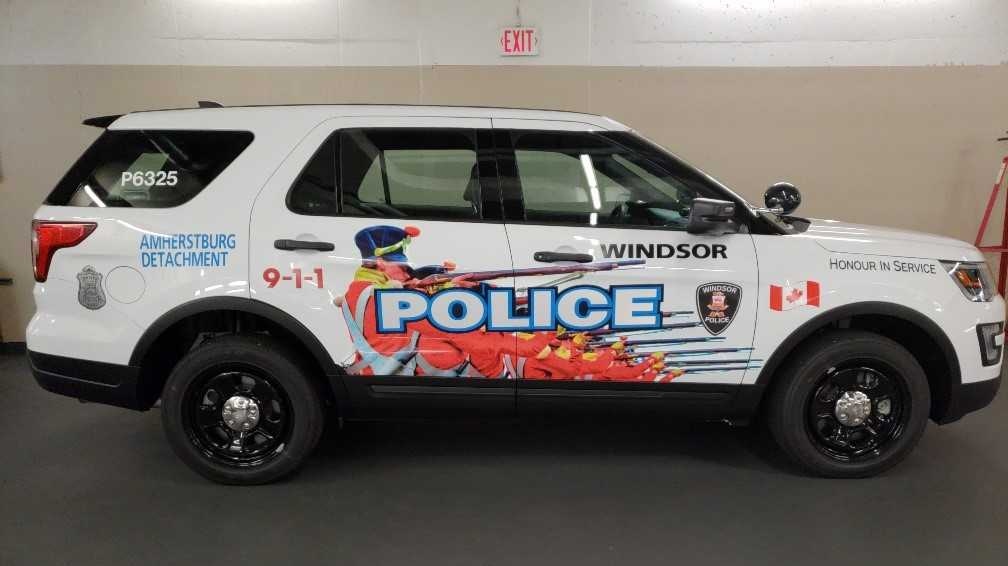 This is the design chosen by residents of Amhertsburg for police vehicles when Windsor police takes over responsibilities in 2019. ( submitted by the Town of Amherstburg )

Administration is asking for more time before council is tasked with deciding whether or not to renew their contract with the Windsor Police Service.

The matter is up for debate during Monday’s council meeting.

When Amherstburg signed the policing contract in 2018, council agreed to seek public input on “the overall experience with the Windsor Police Service” before renewing their contract.

According to a report on Monday’s agenda, CAO Valerie Critchley wants the deadline extended for the third time to March 31, 2023.

“This will allow Administration to prepare a report regarding the first term of the contract for council’s consideration in an open public meeting during the first quarter of 2023,” the report reads.

The report indicates the deadline has twice been pushed back because of “administrative turnover” and the municipal election.

According to the report, the extension “provides the best opportunity for community participation when the issue is considered by council.”

Administration is aiming to have the report on the first five years of the police contract ready for a meeting early in January.

Council would then see the report and seek public input on the service before deciding to renew for another five years or not.

During the election campaign, many candidates mentioned the fact the town has been saving money in their budget in case they decide to restore a municipal police force.

The federal Liberals are withdrawing an amendment to their guns bill that introduced a controversial new definition of an assault-style weapon.

The Department of National Defence says Canada is working with the United States to protect sensitive information from foreign intelligence threats after a high-altitude surveillance balloon was detected.

Canada's egg industry appears to be quietly sidestepping widespread shortages and wildly spiking prices affecting other countries, and some say supply management is to thank.

Hundreds of customers who scan QR codes for restaurant menus across Canada are being surprised by secret menus instead, revealing the hidden costs behind the food they eat.

Most of Ontario is under an extreme cold warning as a blast of Arctic air delivers biting wind chills.

Could the fungal outbreak in The Last of Us happen for real?

The post-apocalyptic TV adaptation of the video game The Last of Us has some wondering about the real-life possibility of a global pandemic caused by fungus, and one expert says it’s not a concept to dismiss.

British Columbia Premier David Eby says he's going into next week's health-care meeting between the premiers and prime minister with an open mind — and without a red line dollar ask for the federal government.

Big tech companies that offer online streaming services could soon be required to contribute to Canadian content as a controversial Liberal bill gets one step closer to becoming law.

China: Balloon over U.S. skies is for research, wind pushed it

China said Friday that a balloon spotted over American airspace was used for weather research and was blown off course, despite U.S. suspicion it was spying. The discovery further strained already tense relations between Beijing and Washington.