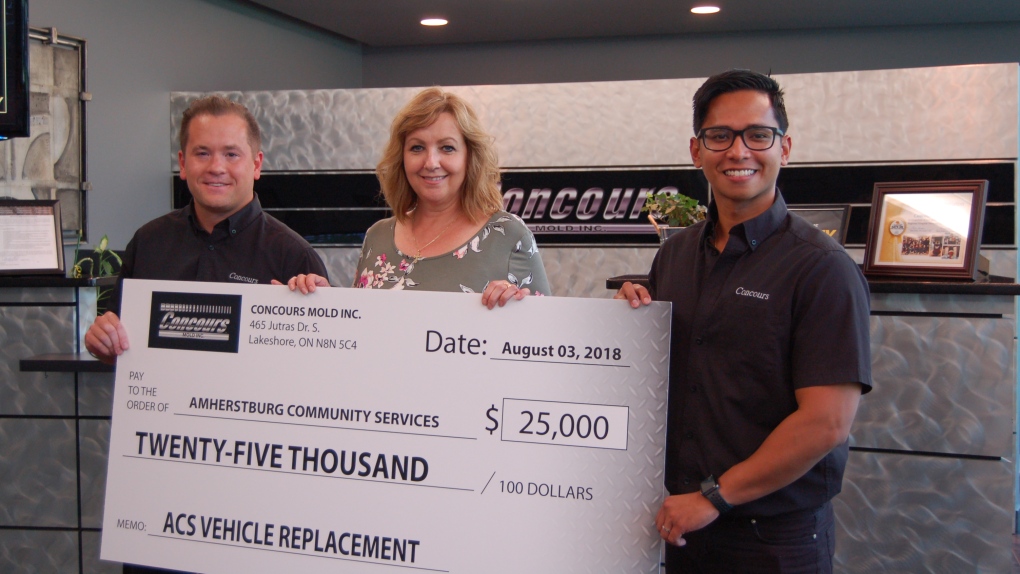 A donation by the Goggin family and Concours Mold will help ACS help purchase an accessible vehicle. ( photo supplied by Amherstburg Community Services )

Generous community donations will help get an accessible van back on the road in Amherstburg.

A $32,000 donation was presented Friday from the Goggin family to help Amherstburg Community Services reach its fundraising goal.

Safety concerns and a lack of funds forced ACS to take its accessible van off the road in mid-July -- ending regular trips for those with mobility issues.

The van also served as a shuttle for St. Clair College students.

Joanne Goggin, who initially came forward on behalf of her family including Mark, Dennis, Kenny and Jmar, says they all hope to see their donation inspire the community to continue to support these services.

“When we saw that ACS was having difficulty raising funds for the new van and heard the story about [another vehicle] breaking down we knew we wanted to commit personally to completing this purchase,” Goggin explained. “This is a fantastic organization which has benefited not only the senior community but many other groups in Amherstburg as well; we want these programs to flourish.”

The Amherstburg family's donation helped trigger a $25,000 donation from Concours Mold to help buy a replacement van. ACS had raised over $18,000 before the Goggin gamily donation.

ACS executive director, Kathy DiBartolomeo says she was shocked when she was approached by the Amherstburg family.

“It’s unbelievable. I’m not sure words can describe just how important this is to us and to the rest of our community,” said DiBartolomeo. “So many people rely on our services to stay mobile.”

Fundraising Co-ordinator Austin Tyrrell says there have been short-term solutions lined up to resume the college shuttle service in the fall as the new vehicle isn't expected to be ready for another two to four months.