Friday Aug. 26, 2022, marks the one-year anniversary of the explosion that rocked the small fishing community in Southwestern Ontario.

Today, that building is long gone and the debris from the explosion cleared away.

In its place, a massive drill is boring down to the bedrock.

“What they’re doing is working on the third and what we believe is the final well in close proximity to where the explosion occurred,” Don Shropshire, outgoing CAO for Chatham-Kent told CTV News in an interview.

Crews are placing a core around the wells and they will remove material from the cored-out area to test, according to Shropshire.

He says the engineering firm of Golder and Associates will then make a determination about where the gas is coming from and how to fill the wells and recap them. 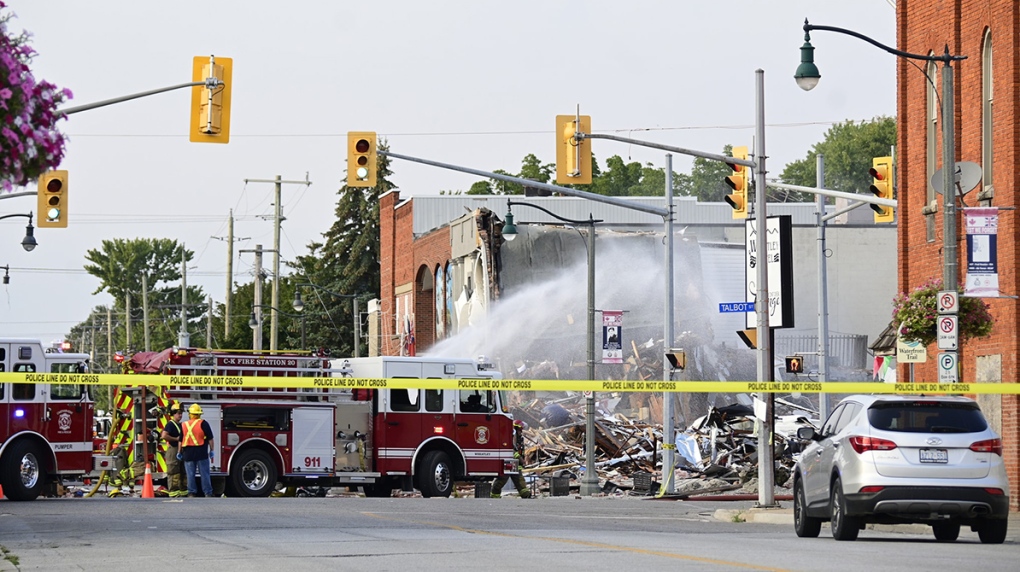 The aftermath of an explosion in Wheatley, Ont. on Thursday, Aug. 26, 2021. (Source: Municipality of Chatham-Kent)“They'll be pouring the cement until it comes back up too close to the surface,” says Shropshire. “(Then) they'll give us direction in terms of how many of those properties have to remain closed down or they’ll be recommending (if) there still has to be some restrictions on the use of those properties.”

Shropshire says what he can’t say is the answer to the question everyone wants to know — when?

“I don't have a specific date. It depends on what the recommendations are from Golder, but we're expecting that the area that's restricted will not be any larger and likely (will) be smaller than what we currently have in the evacuation area,” says Shropshire.

To date, Shropshire estimates the Wheatley explosion has cost $20 million, between the Province of Ontario and the Municipality of Chatham-Kent.

Shropshire says the province is paying for the work by Golder and Associates and is picking up the cost for continual gas monitoring.

“So far, the municipality (of Chatham-Kent has) spent a little under nine million (dollars) on the expense,” Shropshire tells CTV News. “We expect that it's going to continue to go up.”

Shropshire says they will be dipping into their strategic reserves, which he says are designed to be there in emergency cases like this.

“The province has already transferred $2 million toward those expenses and they've made a commitment to transfer an additional $3.9 million to cover some of the expenses to date,” says Shropshire.

“It’s in the ballpark of at least $20 million and the works not finished yet,” says Shropshire.

The largest share of Chatham-Kent’s expenses has been the cost of staffing the evacuation zone with firefighters for nearly a year.

“We posted firefighters here from the night of the explosion for 298 days,” says Chatham-Kent Fire Chief Chris Case. “Those firefighters sat at the scene, 50 yards away from the danger, ready to respond should it come back.”

Chief Case says they even set up a temporary fire hall in the evacuation zone, with a truck, a captain and three firefighters for nearly a year. 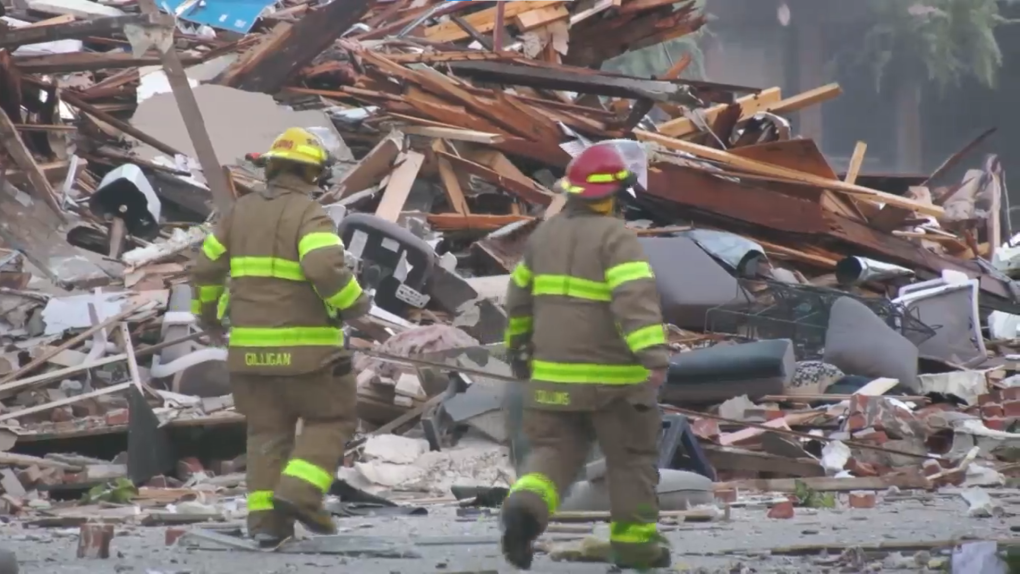 Damage and emergency crews are on scene after an explosion in Wheatley, Ont. on Thursday, Aug. 26, 2021. (Angelo Aversa / CTV Windsor)“We even created a mobile gas detection unit,” adds Chief Case, which was in addition to the industry experts hired by the province to monitor the gas as well.

Over the past year, Chief Case and Shropshire say gas has been detected at the scene, but the situation was resolved without incident because “there was a plan.”

“We have the fire department and then we have the Wheatley scene,” says Chief Case. “We talk about it every single day, almost every hour.”

On the night of the explosion two municipal employees were hurt, according to Chief Case.

Chief Case says they returned and continue to work on the Wheatley scene. He notes every member of the Chatham-Kent Fire Department has taken a shift at the evacuation zone over the past year.

“We've got firefighters who have been on scene here for nearly 300 days. Christmas Eve, Christmas night, New Year's Eve, Thanksgiving, there were firefighters who sat with fire trucks in case the worst should happen. That's the level of dedication that the firefighters have shown,” says Chief Case.

Chief Case says the volunteer service also handled 80 other calls in the last year, while maintaining a presence in Wheatley.

Yet he says what they are most surprised by, is the response of the local residents, many of whom were escorted by firefighters to get into their damaged homes.

“And on every single occasion these people have lost everything, they come up to a firefighter they’d thank them. And the firefighters (say) ‘you don't need to thank us, this is what we do,’” Case says.

Even though a year has gone by, Chief Case says he still can’t say the scene is safe.

“We're trying to make the scene stable. I couldn't say that it's safe because the work is still ongoing,” he says. “I've had to temper my own enthusiasm to try and get this done because there's nothing we'd like better than to get it fixed.”

“That's where we feel our frustration because we really just like to come in, make everything good then and then go back to the hall. We haven't gone back to the hall yet.” 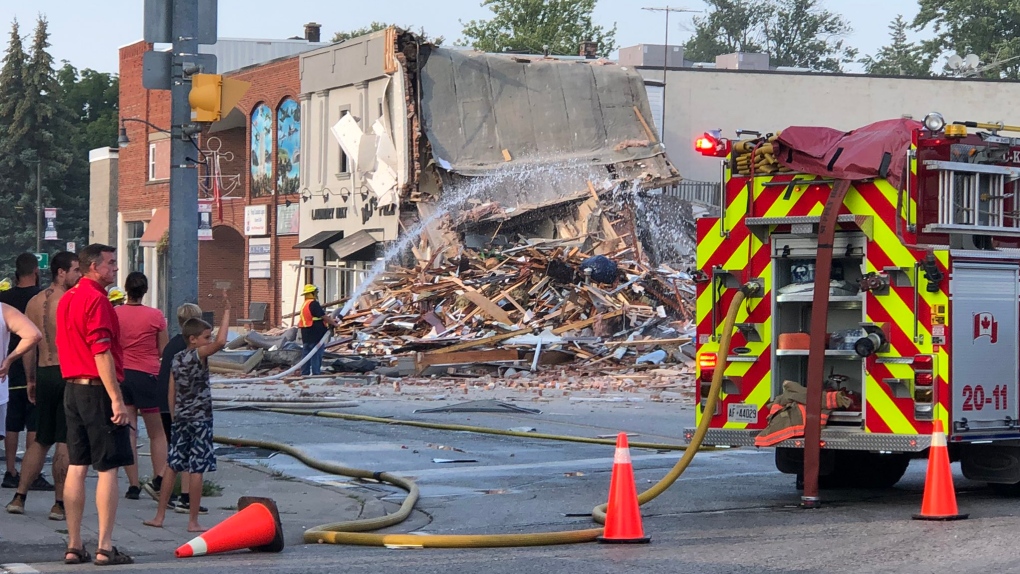 There is significant damage after an explosion in Wheatley, Ont. on Thursday, Aug. 26, 2021. (Source: Kathryn Parent From photography by phos3)

One year later, residents still dealing with the aftermath

The community banded together after the explosion. Neighbours supported each other by hosting fish fries and creating “Wheatley Strong” tee shirts to aid with fundraising.

One year later, some are donning a different shirt “#I want to go home.” Becky Lamb and her husband Bugsy have not lived at their Foster Street home, which is still in shambles since the blast.

Homes have needed extensive renovations after siting empty for eight months. Becky says their house is littered with mold as the couple stays at an Airbnb in Leamington.

Foster Street residents were able to access their houses in April to collect items and assess the level of damage. While some have been able to return home since, of the 13 houses on the street, seven are still waiting.

“I know it's going to be a marathon. I get all that. I get how slow it is but c'mon. Here our cries. Hear us,” Becky says.

To date, 19 homeowners remain in temporary housing and an additional 18 tenants still have not been able to return to their rental units.

Neighbour Geri Veri has been told she and her husband can move back in on Sept. 1.

“I wanna be with my stuff. My belongings. My people. My neighbours. I just wanna be home,” she says.

Veri is hopeful there will be no more emergencies or other priorities and their house can be finished in time.

She was flooded with emotion as the one-year anniversary arrived.

“It's a very traumatic experience. I still re-live the explosion. The noise. The aftermath,” Veri said.

Along with residents, business-owners are also still feeling the impact. 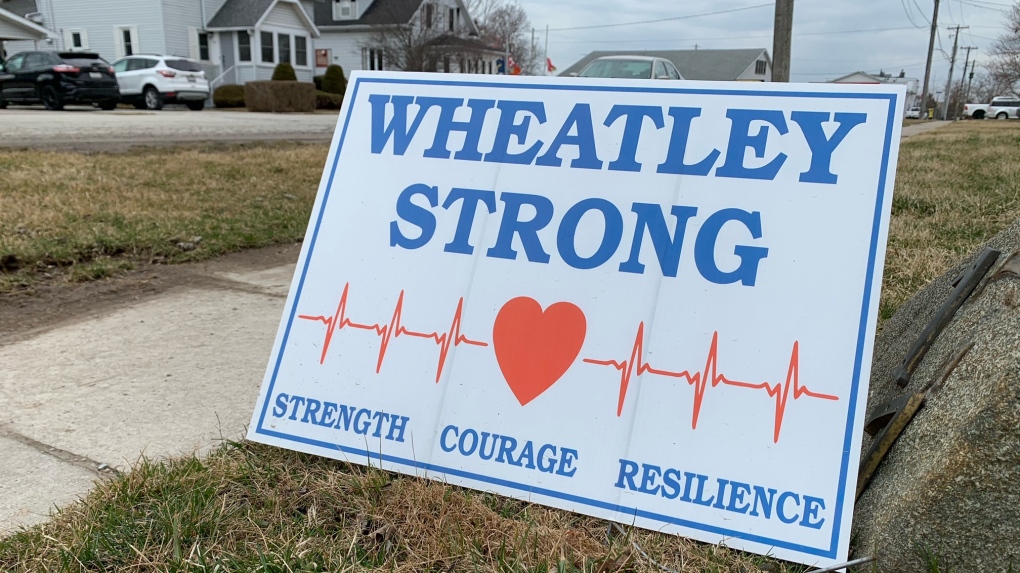 “Some businesses have set up operations in different locations and it is not clear if they plan to stay where they are or return to their original space,” notes Shropshire who says at least one business owner has already told the municipality he intends to retire rather than reopen.

“Several others, located in the current evacuation zone have yet to have access to their properties to evaluate the extent of the damages and to determine remediation costs,” says Shropshire.

Mike and Erika Renwick, owners of Renny’s the Village Smokehouse on Talbot Trail Road say their restaurant remains closed for the foreseeable future.

“I've been self-employed for almost ten years and at no fault of our own it was taken away. You almost lose your sense of purpose,” Mike explains.

“We see these funds come in from the province but really it's just not how we like to make money,” Erika adds.

The Renwicks say they are still happy to see other businesses around town able to reopen.

Resident Lee Penfold is happy his nightmare on Elm Street is over after moving back in three weeks ago.

“It's nice to be sleeping in your own bed that's for sure,” he says.

“Yes,” he says. “It definitely meant something.”