While the federal government's move to lift restrictions on how long international students can work in a week is being applauded by many, an immigration consultant in Windsor, Ont., is concerned it could do more harm than good.

Currently, international students are permitted to work 20 hours per week. The only time of year when that restriction does not apply is during scheduled breaks, such as reading week or summer and winter holidays.

Starting Nov. 15 until the end of 2023, there will no longer be an "upper limit" on how many hours they can work. The new directive applies to those who have submitted a study permit application as of Oct. 7, 2022.

"This means that more than 500,000 international students who are already here in Canada are going to be eligible to work more if they choose to do so," said Fraser.

University of Windsor master student Kenil Maniya said, on any given day, he finds himself with free time that could be better spent making money at his job. But when he's already worked 20 hours that week, it's not possible.

"I'm really happy that we can tell our manager we are ready to work more. We are always ready to give our best," said Maniya.

He added there's no reason why the federal government should not be using international students who are itching to work to fill the country's labour shortage.

"When students come, some of them take a loan back in their home country so they have to manage their finances over here," he said.

"Utilizing the current student resources will make the students happy in Canada."

According to immigration consultant Amanjit Verma, however, the federal government's new policy is "short-sighted."

"The fact that there was a limit of 20 hours was a bit of a blessing in disguise," said Verma, adding the time restriction helps international students achieve a work-school balance.

She also has concerns about the information international students receive in their home country before coming to Canada and how the new policy may reinforce that.

"I've been amazed and saddened by when these students come and tell me the kind of immigration advice they got from their international student advisor who has no idea how IPA (Immigration and Refugee Protection Act) and everything else works," she said. 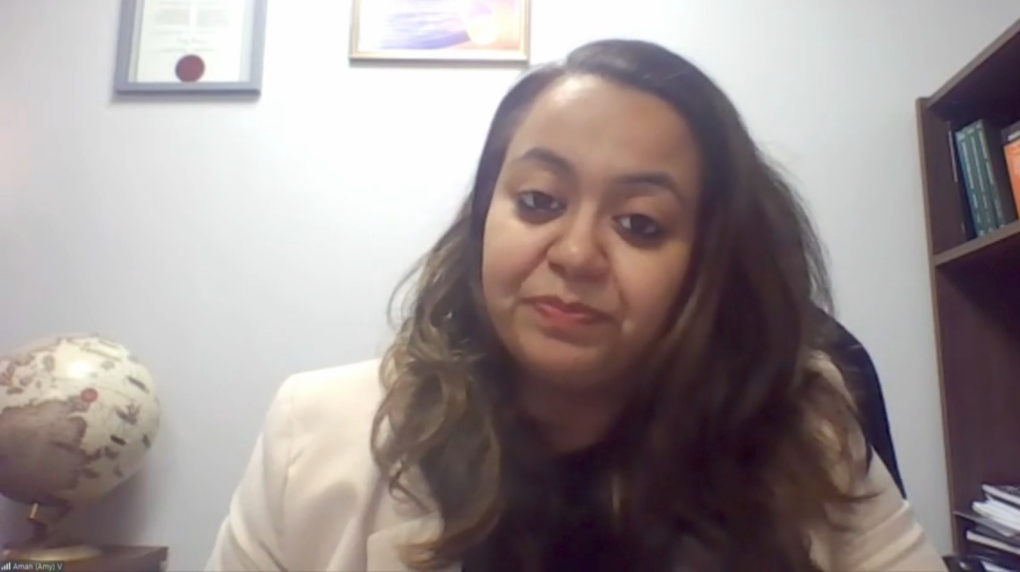 Immigration consultant Amanjit Verma says the limit on how many hours international students could work helped them to achieve a work-school balance. Verma is pictured on Oct. 7, 2022. (Sanjay Maru/CTV News Windsor)In Verma's experience, she said, one of the most common "refusal grounds" for postgraduate work permit applications is a student not able to maintain full-time academic status — and many students do not realize that.

"So if someone who's now working more than 20 hours, because they're authorized to do that off-campus, goes part-time or reduces his course load, it will negatively affect his ability to get that work permit that will get him his PR (permanent residency) later on," said Verma.

She added some international students work under the table for cash, beyond the 20-hour limit. The result, she said, is employers exploiting them for cheap labour.

"I'm just concerned about repercussions for the students with this new policy," said Verma.

As for Maniya, the India-born student said he is trying his best to achieve a healthy work-school balance and added he's just happy he no longer has to circle scheduled breaks from school on his calendar until the end of next year.

"We always ask our boss during those times to please provide us with a full-time schedule," said Maniya, adding he will often "multitask" and work on school tasks while on the job.

"It's stressful a bit but lifting the hours will be good for us. It's nice we don't have to wait for reading week anymore."

In a statement, Migrant Workers Alliance For Change applauded the lifting of working hours, saying the group has been campaigning the government to do so in the name of "labour rights and mobility."

"Removing the limit on hours of work while studying gives student migrant workers the power to leave bad jobs, speak up against exploitation and mistreatment, and freedom and flexibility to make decisions about their work," the group said in a statement.

Grant Wahl, one of the most well-known soccer writers in the United States, died early Saturday while covering the World Cup match between Argentina and the Netherlands.

Phase 1 of Canada's single-use plastics ban comes into effect this month. These are the products on the list

Canada's ban on single-use plastics, starting with the manufacture and import for sale of a number of products, comes into effect later this month.

The search for a Washington state woman whose husband couldn't find her after spotting a shark while they were snorkeling in Hawaii was called off Friday.

Google's top trends: What did Canadians search for in 2022?

As we approach the new year, Google is providing a glimpse at what 2022 looked like for Canadians, based on the most popular search terms entered on the site.

'I will not be resigning': Winnipeg police chief supportive of determining if landfill search is possible

Amid calls for his resignation, Winnipeg's police chief says he will not be stepping down and is committed to getting justice for the four victims of an alleged serial killer.

The federal government has approved a change in how the cannabis content of beverages is calculated, pushing the number of standard-sized, canned pot drinks that can be bought at once from five to 48.

Here's what Gen Z wants in 2023, according to Instagram

Instagram has published a new report highlighting the top rising trends for the coming year among Gen Z users across the platform.

Oldest known pair of jeans in the world pulled from shipwreck, sold at auction

Pulled from a sunken trunk at an 1857 shipwreck off the coast of North Carolina, work pants that auction officials describe as the oldest known pair of jeans in the world have sold for US$114,000.