The City of Windsor unveiled its plans Tuesday for the future of Adie Knox Herman Arena and Pool on the west end.

Called “Strengthening West Windsor Recreation”, the city is moving the community pool 1.5 kilometres from Wyandotte and McEwan over to the St. Denis Centre on College Avenue.

Here's a photo gallery of the new Lancer Centre.

Officials say residents with a swim membership will have access to the pool on campus and parking will be free.

Windsor will be giving the University of Windsor money to build the pool at their new facility.

The city says $42 million is invested in Adie Knox and they are hoping for $13.5 million from the federal government.

The Lancer Centre will be built to include a 25-metre community pool, three gymnasiums with seating for 2,000 people, a recreational jogging track and fitness centre. 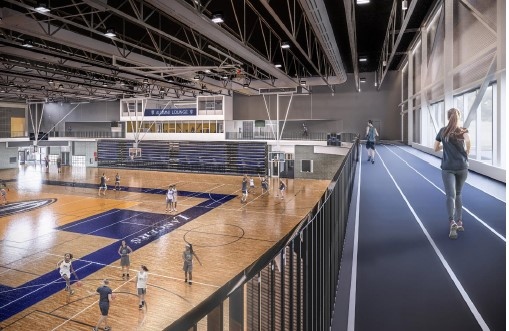 A look at the new Lancer Centre to replace Adie Knox in Windsor, Ont., on Tuesday, June 8, 2021. (Courtesy City of Windsor)

Then the city will embark on a complete overhaul of the entire Adie Knox facility.

Where the pool currently is, the plan calls for a basketball court, multi-purpose rooms and change facilities.

The baseball diamond would be removed at the south end of the property.

In its place, will be a new parking lot with 194 additional parking spaces.

The city would also like to build a new tennis/pickle ball court, an outdoor basketball court, new playground and splash pad.

The ice rink would remain in place with renovations.

To do all of this, Windsor is going to apply for funding through the Green and Inclusive Community Building Grant (GICB).

The clock is ticking since the application is due in early July and the city has yet to get final approval from Windsor City Council on this idea.

The city has created an online survey for public response.

Feedback will be accepted until June 15 at which time administration will draft a report for Council consideration at the meeting on June 21.

If council approves the plans, the city’s federal grant proposal must be submitted by July 6, 2021.