141 COVID-19 cases reported in Windsor-Essex, including 3 deaths and 13 new cases

There are 13 new cases in the region, bringing the total to 141.

“These are people we are talking about,” says Ahmed. “These are parents, these are grandparents.”

Ahmed says the two new deaths were elderly patients, a man and woman, both in their 80s. 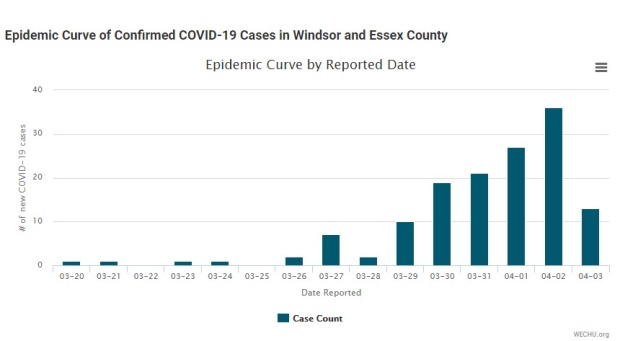 “For some it’s just a number, but for family it’s real people,” says Ahmed, who added they respect the privacy of the families and will not be releasing more details.
Ahmed says they passed away in long-term care, not the ICU. They were receiving care, but still waiting for test results.
There are 12 cases total at long-term care homes in the area.

The total number of deaths related to COVID-19 in Windsor-Essex is now at three. An 81-year-old man died in the ICU at Windsor Regional Hospital on Tuesday.

Ahmed also gave a breakdown of the local cases and projections for Windsor-Essex on Friday morning.

Over 80 per cent of the local coronavirus cases are recovering at home with mild symptoms, 15 per cent are hospitalized and 4 per cent are in the ICU.

The number of cases in the area is doubling quickly and Ahmed warns it could be in the thousands by the middle of April. 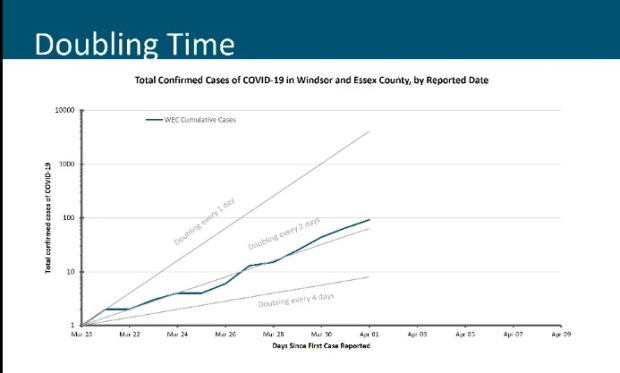 “If you continue to go at the current rate, by the second and third week of April our case count could be in the thousands,” says Ahmed. “Not everything is as bad as it sounds. We understand they had a huge backlog and is currently catching up.”

The health unit says the curve can be flattened by extreme physical distancing.

“It should be concerning for all of us that right now the cases are doubling fast and we must do everything we can to slow it down,”says Ahmed.

He says the models are just projections of possibilities of what the community could be facing.

“It’s too early to say at this point how much of a change that we will make,” says Ahmed.