128 cases of COVID-19 reported in Windsor-Essex, including 36 new cases

WINDSOR, ONT. -- The Windsor-Essex County Health Unit says there are 128 cases of COVID-19 in the region, including 36 new cases.

“This week we have seen the number of cases pass 100 in our community including outbreaks in the long-term care homes,” says Ahmed. “This is now shifting our attention towards the most vulnerable in our community, who are living with chronic conditions.” 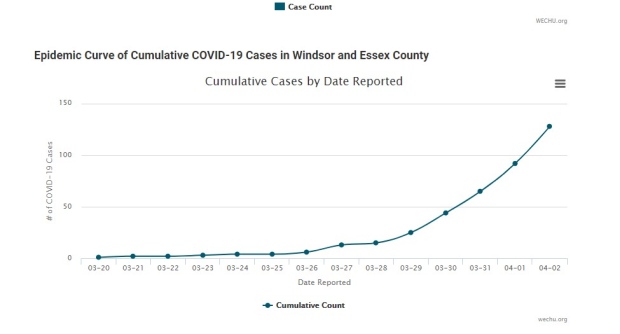 The most recent case reported is at Lifetimes on Riverside.

There are also two confirmed cases in the staff population of Country Village Homes in Woodslee, and one in the staff of AMICA in Windsor, Ahmed confirmed Wednesday afternoon.

“The ministry has provided guidance to long-term care homes around COVID-19, starting from preventing the introduction of COVID-19 into a long-term care home and associated preparedness measures to when a home is under an outbreak,” says Ahmed.

As the number of cases in the region increases, Ahmed says if necessary, they will issue an order to people who are not following self-isolations as they should.

“We want people to take this seriously,” says Ahmed. “This is not a joke. People are dying and people will die.”

The City of Windsor has not yet established a violations enforcement hotline, but Ahmed says in the meantime, you can call the health unit.

He says they will look into setting up a better practice.