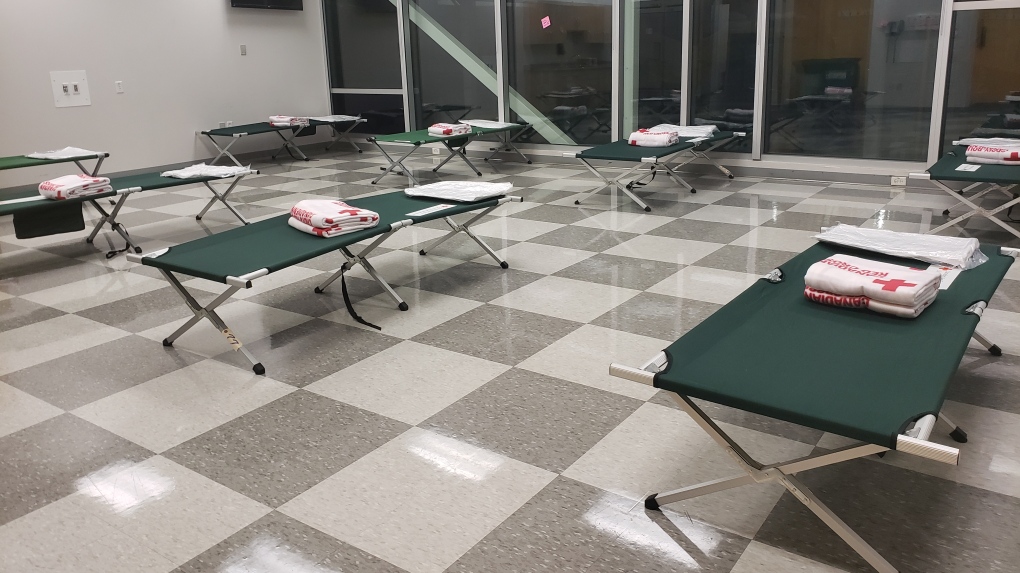 Inside the temporary shelter at Windsor International Aquatic and Training Centre in Windsor, Ont. (courtesy City of Windsor)

On Friday, city and frontline Downtown Mission staff, along with community partners, helped relocate residents of the mission to the temporary shelter or one of two Isolation and Recovery Centres (IRC).

The Windsor-Essex County Health Unit issued an order on Feb. 19 to the Downtown Mission restricting access to new clients, city staff, support agency workers due to a COVID-19 outbreak. On Feb. 25, WECHU said there were 81 cases of the virus linked to the mission and 34 cases connected to the Salvation Army.

Since residents were sheltering in an environment where they may have been exposed to the COVID-19 virus, they were transitioned to either TESAC or to one of the two IRC’s according to health unit guidelines, to help stop the spread.

As reported previously, once isolation is completed, those in an IRC will transition to TESAC until March 29, allowing the mission to come into compliance with public health directives.

“I want to thank the front-line staff of the Downtown Mission who have provided critical staff supports to operate the TESAC. We could not manage this effort without their dedication, compassion and expert knowledge of the residents they serve,” said commissioner of Community Development and Health Services Jelena Payne. “We are also appreciative of the efforts of partner agencies supporting residents at the other emergency shelters and isolation centres. Together we will get through this.”

TESAC can support up to 75 residents. In addition to TESAC, staff are also working on increasing capacity at other shelters and working on longer term solutions to support everyone over the next four weeks.

The city says individuals have the right to choose which services they accept and some mission residents have declined the shelter options available to them.

The temporary emergency shelter at 401 Pitt Street West will be operated by the community coalition until March 29. It is expected that at the end of the month the facility will be decommissioned and returned to the City of Windsor, and residents of the Downtown Mission will return to the regular Mission location.

“We are grateful to the City of Windsor for making TESAC available for the interim use and transition period,” said Bill Marra, V.P. of external affairs at Hotel-Dieu Grace Healthcare. “Working alongside our friends and colleagues from the Downtown Mission, the City and public health as well as our other community partners, we are very focused on managing the outbreak, stopping the spread of COVID-19 and supporting the Mission to return their original location.”