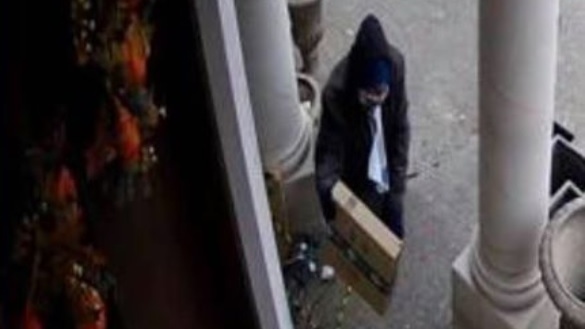 WINDSOR -- A Windsor man is posting a large reward to help catch a neighbourhood “porch pirate” who got away with a package of almonds.

Sam Alhaj took to Facebook a few weeks ago offering up a $10,000 reward to anyone who can identify a person seen on his surveillance system allegedly stealing a package off his front porch on Nov. 22, 2019.

The unknown person approached his Windsor home around 1:40 in the afternoon on a bicycle and scooped a package off his front porch.

The ‘porch pirate’ is wearing concealing clothes but Alhaj is hoping someone will recognize the clothing or bicycle and turn the person in.

"I wish he would have knocked, I would have given it to him," Alhaj says.

Alhaj posted pictures and videos of the alleged thief in action – swiping a $10 package of almonds. But Alhaj says the big reward isn't about the stolen item.

"It is a lot of money for a $10 package they stole but I have six kids at home and I don't like to see anybody on our property," Alhaf says.

“Porch pirating” is a growing phenomenon, especially during the holidays as more and more people are ordering products online and having them delivered during the day. According to consumer affairs and insurancequotes.com, nearly 26-million packages from the United States Post Office, Fed Ex and UPS were reported stolen in 2018 alone.

Alhaj spoke with CTV’s Chris Campbell, who will have a full report on CTV Windsor at 6.

A Windsor man is putting up a $10,000 reward for the identity of the #PorchPirate who took a package of almonds off his front porch last month. @CTVWindsor pic.twitter.com/7VdMZ5T1ki